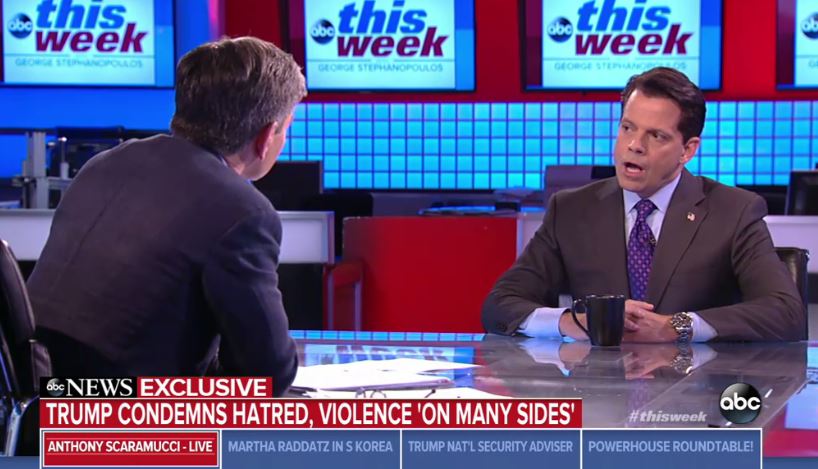 While former White House Communications director Anthony Scaramucci gave big ratings to a late night comedy show, his appearance on a Sunday morning public affairs did not perform as well.

Scaramucci’s first sit-down, a 14-minute interview with This Week’s George Stephanopoulos, brought in 3.32 million viewers and 916,000 viewers in the A25-54 demo. That put it in second place behind NBC’s Meet the Press which averaged 3.61 million viewers and 1.1 million in the demo. This Week did see a boost vs. its July average of 2.7 million viewers, or up +23 percent. All four Sunday shows saw higher viewing levels due to coverage and analysis of Saturday’s violence in Charlottesville.

Last night, Scaramucci gave CBS’s The Late Show with Stephen Colbert its highest-rated Monday ever. The show earned a 3.1 rating / 8 share of the audience, compared to NBC’s Tonight Show which, in second place, drew a 1.6 rating and 4 share in the 56 overnight metered markets.

The episode tied the most-watched regularly-scheduled Late Show since Sept. 22, 2015.

In both interviews, Scaramucci talked about the conversation that got him fired, that profanity-laced phone chat with the New Yorker’s Ryan Lizza. “Which, for the record, I thought was off the record,” he told Stephanopoulos.

“This is the reason why the media gets a bad shake from the American people that was a very deceitful thing that he did.”

Here are both interviews: