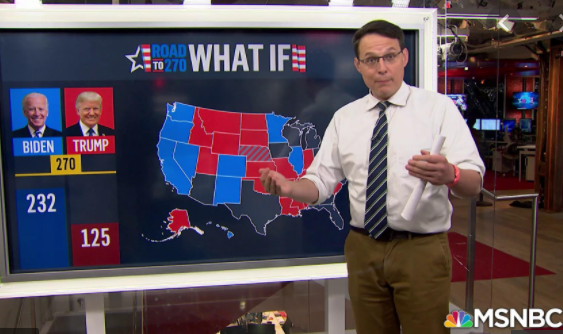 MSNBC announced Tuesday that it will be presenting in-depth coverage of the Virginia and New Jersey gubernatorial elections, in addition to state-level and local mayoral elections – all taking place next Tuesday, Nov. 2.

Beginning at 4 p.m. ET, MSNBC programming will feature analysis, on-the-ground reporting and real-time updates. Rachel Maddow, Joy Reid and Nicolle Wallace will co-host live coverage beginning at 6:45 p.m. ET, and they’ll remain on air through primetime with live results as polls close and races are called. The trio will be joined by Chris Hayes and Lawrence O’Donnell for real-time insight and analysis as the polls close and races are called.

Brian Williams will pick up coverage for a special live two-hour edition of The 11th Hour at 11 p.m. ET, followed by Ali Velshi at 1 a.m. ET who will anchor into the early morning hours.

The network also announced today that NBC News and MSNBC national political correspondent Steve Kornacki will return to the Big Board next Tuesday to break down the latest polling, patterns and exit polls as the votes are tallied for these elections. Viewers will have the ability keep up with Kornacki and the behind-the-scenes action all night, with the return of the Kornacki Cam streaming nonstop at MSNBC.com and on-air.

NBCU News Group chairman Cesar Conde said during our conversation earlier this month that Kornacki would have a significant presence across all platforms in the coming election cycles and that he would be used in new ways, both in 2021 and for next year’s midterms coverage in 2022.

On Wednesday, Nov. 3, Peacock users can watch Morning Joe Election Recap, a full hour of the top moments from MSNBC’s Morning Joe. The program will feature the notable moments and analysis from Joe Scarborough, Mika Brzezinski and Willie Geist and their roundtable guests.

NBC’s 24/7 standalone streaming news service NBC News Now will also present special coverage of these elections beginning next Tuesday at 9 p.m. ET. The primetime Meet the Press: Election Night Special will be hosted by Chuck Todd and Kristen Welker. Todd and Welker will be joined by Andrea Mitchell and NBC News Now host Joshua Johnson, along with correspondents and reporters dispatched across the country. The special marks the first of several specials that the streaming network will host leading up to next year’s midterms.