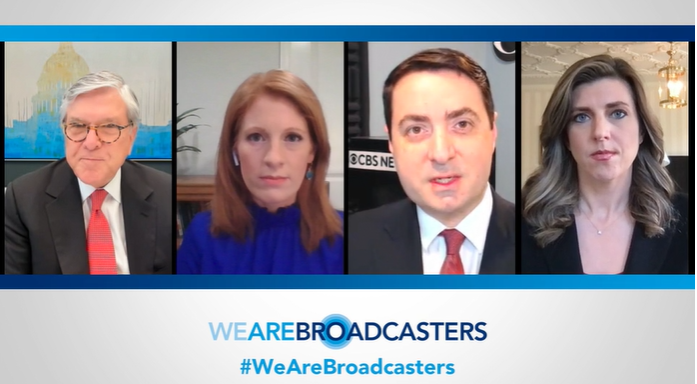 ABC News Washington correspondent Karen Travers, CBS News Radio White House correspondent Steven Portnoy, and NBC News Digital senior White House reporter Shannon Pettypiece sat down with NAB President and CEO Gordon Smith during the 2021 NAB State Leadership Conference to discuss similarities and differences between the Trump and Biden administrations’ relationship with the press, the effects of the pandemic on White House news coverage, the role of the daily press briefing and the challenges of the 24/7 news cycle.

This session is a follow-up to the 2019 NAB Show session titled Beyond the Briefing Room: Tales From the White House Beat, which we covered in person in Las Vegas.

This particular session was, of course, a virtual one.

Smith: With Covid, I’m sure many things have changed for you in how you do your work. I wonder if you can reflect on what Covid has done to your daily work, and what January 6th [insurrection on the U.S. Capitol] means to you.

Portnoy: With respect to January 6th – it was just an awful day. The reason why we in the press keep talking about it, while politicians here in Washington keep talking about is because it was one of the worst days in the history of our country, and we can’t forget, we can’t let it go. I was on the air on our CBS Radio Network for eight hours broadcasting live coverage of what I called on the air “a gang of marauders” overtaking the U.S. Capitol in a scene that is reminiscent of perhaps some of the darker scenes in the 19th century.

When it comes to Covid — It has completely changed the way every broadcaster does his or her work, mainly from home. I’m speaking to you from my home studio that I’ve set up.

Karen and I serve on the board of the White House Correspondents Association, and Covid has completely changed the way that reporters at the White House interact with the President and the press secretary. We had to, on our own, in the heat of it, at the start of the Covid pandemic with Donald Trump as president, and at that point, he had yet to appoint Kayleigh McEnany as his press secretary, we had to instill our own social distancing rules. Typically, you have 49 reporters sitting in the seats, seven rows, seven seats. That space, which is roughly the size of a three lane lap swimming pool that was installed by FDR, they put the briefing room on top of it; [former President Ronald] Reagan put in the seats in 1981. What we had to do was figure out a way to at first kind of half the number of reporters would be sitting in those seats, and then cut it even further. When we believed we had a scare in our press report, then we started wearing masks. One of the things we’ve had to do is develop these rotations, where we essentially have close to 90 different news organizations sharing those 14 seats rotating on a daily basis. It’s taken a tremendous amount of time, but it’s been particularly important to make sure that we have a press corps that is representative of the public, and is there each day that there is a briefing to ask questions that that are on the public’s mind.

Pettypiece: Just on Covid, and the difference between the White House — I have only been to the White House once during the Biden administration, because of all the restrictions this new administration has put in place, in addition to additional restrictions that NBC has continued to put in place to protect our safety. We have done lots and lots of Zoom background polls, but I have physically only been in the building once in the past 100 days almost.

Now, the Trump administration seems that the rules were so lax and one of the last times I remember being in the White House, I had an N-95 mask on. It was the day the President was being helicoptered off to Walter Reed. So, peak height Covid concerns; and I remember I went up to the press office, the press secretary’s office, the staffers were all crammed in there, some of them had their masks pulled down around their chin, and they came out and there was one official there I was trying to talk to who didn’t have a mask on and I remember thinking like, “Oh my god, like what, you know, what am I doing?” It’s been a drastic change. Just as a reporter,  I wasn’t directly involved in the events that happened on January 6, and that day still gives me PTSD. But I feel like the entire Covid pandemic has certainly been the most important story I feel like I’ve ever covered.  But I remember being in the briefing room when Dr. [Deborah] Birx said that 100 to 200,000 people could die, and I was so rattled by that prediction she was making and I really hope she was wrong. President Trump kept suggesting she might be wrong. So, I wanted to believe that. I think that was one of the toughest days to sit there and have someone tell you that one of the greatest mass casualty events in our history of our country is about to happen in the next few months. Indeed, watching it happen, and watching the administration deny it or struggle to respond to it. I think that was one of the hardest stories that I had to watch.

Looking at more than half a million people that I do go back and think a lot — Did we do all we could do as reporters to cover this story accurately and fairly and get a message out there? I think we did the best we could do, but I often go back and think, “is there more I could have done to drive home that message to people about what was coming in the public health crisis we were about to face?” Maybe we could have changed the course of how things unfolded in some tiny ways.

Travers: On January 6, I was also at my home, (not out up on Capitol Hill) broadcasting live for about eight hours or so like Steven was. As you’re doing that reporting, as you’re checking in with sources and trying to get more information on the ground, color of what’s happening, there’s also just that horrible feeling in your stomach about your colleagues that are out there, and you’re hearing them in your ear, reporting live from the Capitol through radio, or you’re seeing them on your television, and just very worried about what they’re going through as they’re trying to do their best reporting and get information out to the American people, but also under potentially grave danger to themselves. So, I give such an incredible tribute and shout out to all the colleagues of ours, of all the networks and newspapers, everybody that was up there that day, for keeping their heads down and doing their work. It was just amazing.

On Covid, I think one thing that’s so interesting is that when you look at a story like this that has lasted for more than a year — as reporters, we’ve covered natural disasters, we’ve covered tragedies, shootings, and horrible events. For a lot of that, you go to the place where it happens, and you interview people in the community, and then you go back to your community, and it impacts a particular area or group of people. This has been such an incredible story where everybody on the planet has been impacted in some way. The reporters covering this story are living this story, and that’s a different type of way of doing reporting, where you have to take that step back sometimes. I find myself having to take a step back when I’m doing stories about school reopening or anything involving kids, because I have three young kids at home for a year doing school, and making sure that you’re asking the right questions and channeling what your friends and family and neighbors are all worried about, but still doing that from that  journalistic way and not letting it be about my story, but you want to get answers. So, I think it’s been so it’s just been so profound to cover a story like this, which is touching every aspect of global life. There’s nobody that can say they weren’t impacted by it, and that’s so rare for a story as a journalist, to be able to dive into something like this over the past year.

I also think we’ve been so incredibly creative in the last year. If you had told all of us 15 months ago that we’d be doing this conversation from our home studios through a computer set up. It was always such a challenge to do an interview, via Skype or anything like that. We were concerned about the audio and the video and all of that. But, we figured it out as an industry. We’ve done so many creative things that I think are going to make our business so much better in the coming years. You can talk to more people in far, remote locations; voices that would never have been able to make air because they didn’t know how to get on air, we can d it. We can do it through our phones, we can do it with our computer screens, and I hope that opens up coverage for us and for the American people that we can tell stories that we wouldn’t have told before, and tell them in a very different and creative way.