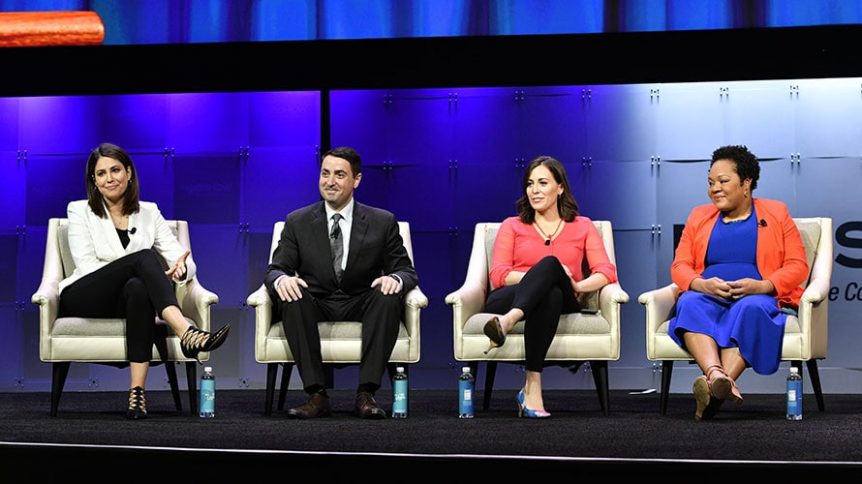 Adweek is attending the NAB Show 2019 this week in Las Vegas, and we’re covering the best in broadcast media storytelling.

This was one of the most timely and well-attended panels on Tuesday (perhaps outside of FCC chairman Ajit Pai’s, which we’ll get to later).

The quartet offered their insights into the trials and tribulations of covering the Trump administration, which is stoking an anti-media sentiment.

Vega said her early experience covering Trump was “like drinking from a fire hose every day. … At the beginning, we jumped every time he tweeted. We jumped every time he did a phone interview. Now, I think there’s a little more breathing room. We have learned that’s OK to pause a little bit more when it comes to some of these tweets.”

NAB president and CEO Gordon Smith, who moderated the panel, mentioned his past life as a two-term Republican Senator from Oregon. He told the room that he recently made a comment to a group of former supporters about the importance of a free press, the First Amendment and investigative journalism, deriding the notion of the “enemy of the people” and “the fake news.”

“A former supporter of mine, a prominent Republican, really chastised me afterwards,” said Smith, adding that the man told him, “You must know that there is an unmitigated kind of bias against Donald Trump.”

Continued Smith, “I’m not saying it’s true, but I know how deep the feeling is, and it’s setting into the American people. Some feel as though the media’s credibility is in question.”

The panelists discussed their own efforts to address that credibility conundrum.

Alcindor added that because many have doubted the media for a long time, it’s a “privilege” to be a reporter. “Every time I write a story … I am trying to convince them that I as an individual have integrity, and I as an individual cannot wake up in the morning and write fake stories.”

Meanwhile, Vega’s solution is “to not screw up,” she said: “To not get it wrong. To get it right. The bar for us is so high right now. We cannot give them—whoever ‘them’ is—that argument that [we] screwed it up. And it happens, and it will happen again. But, every time we mess up, factually, it gives them ammunition to call us fake news.”

The annual NAB Show is the largest broadcast media conference in the world, and there were far more sessions and panels than were possible for us to attend.

We have attended conferences concerning Next Generation TV (also known as ATSC 3.0), which is being rolled out in various markets, slowly but surely.

Fox Entertainment chief Charlie Collier‘s spoke at NAB’s Executive Leadership Summit on Sunday. He spoke about how and why he left AMC for Fox, and described his vision for the new Fox TV and its place within the new company, Fox Corp.

FCC chairman Pai addressed broadcasters on Tuesday, giving his thoughts about the present and future of broadcasting, and how the FCC can help them do their jobs better.

“This isn’t your father’s NAB Show,” he remarked.

Pai made it clear that it’s time for a change. “When it comes to broadcasting issues, the FCC’s guiding principle under my leadership has been to make sure that our rules keep pace with the times,” he said. “Rest assured, we won’t be deterred by those whose regulatory views are not guided by facts and reason, but instead were set in stone in the era of Laverne & Shirley, of Starsky & Hutch, or The Captain & Tennille, if that’s your flavor.”

Pai, interestingly, had lots of praise for the work of local broadcast newsers. One may recall he was appointed to the role by President Trump, a man not exactly known for his love for the press.

The chair said that broadcasters in 2019 should increasingly think of themselves as digital media companies, “with one small caveat: You are still broadcasters first.”

“Being a broadcaster means something different than just being a media company. It means something more. … This is a celebration of the characteristics of what you think define our industry. It’s the stations that go above and beyond to serve their communities. It’s the broadcasters that are there for their neighbors in time of emergency. It’s broadcast performers. And let’s not forget the broadcast engineers who do the important, behind-the-scenes technical work that allows your content to reach the masses.”