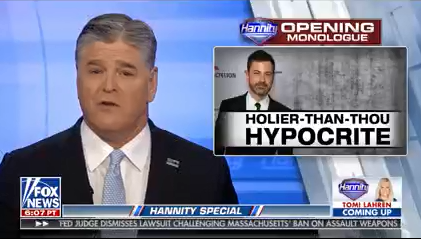 Fox News host Sean Hannity went after late night comedian Jimmy Kimmel on his program this evening, and he went after him for more than 20 minutes, his entire A-block.

“All right. So tonight, right here on this show, we are laying down the gauntlet,” said Hannity. “We will fight fire with fire. We will show you video proof [Jimmy] Kimmel is perverted and misogynistic and racist during tonight’s breaking news opening monologue.”

Hannity proceeded to spend 22 minutes criticizing Kimmel (to put it mildly), referring to the ABC late night host as “a self-righteous sanctimonious social justice warrior,” and later, “a sick, twisted, creepy weirdo, which is why I have been referring to him as ‘Harvey Weinstein Jr.'”

I have just had it with the utter hypocrisy. The unrelenting attacks against not only a sitting president, but his wife and his daughter and his 11-year-old son. The first lady of the United States? Really? This never ends. It needs to end. This is not about politics, this isn’t Republican, Democrat, Conservative, Liberal. It’s way bigger than Sean Hannity or Jimmy Kimmel. What we have is Jimmy Kimmel attacking an innocent woman in this case, Melania Trump for reading a book to children this has to end.

The Fox Newser also teed up video of segments from 2002 when Kimmel hosted Comedy Central’s The Man Show. The segments show Kimmel doing comedy bits, interviewing women in Hollywood, and asking to grab his crotch and “guess” what was in his pants.

Hannity remarked at one point, “I will not stop. It’s not going to end with me.”

Later in the program, the Fox News host took shots at other entertainment personalities, including Jay-Z and David Letterman, showing excerpts from an interview between the two on Letterman’s Netflix series.

This all started when Hannity took issue with wisecracks Kimmel made on his Monday night broadcast about first lady Melania Trump’s accent as she read to children at the White House Easter Egg Roll.

The next night, Hannity called Kimmel “a despicable disgrace,” adding: “That’s her fifth language. How many do you speak?”

Then on Thursday, Kimmel said about Hannity, “This is the guy who defended the multiply-alleged pedophile Roy Moore. And I’m a despicable disgrace?”

The two then engaged in a Twitter spat earlier today.

Today’s poll. So tonight will @jimmykimmel be 1- Asking 18 year old girls to touch his crotch. 2- Make fun of the First Lady reading books to children. 3- Be a racist asshole. 4- all of the above? @Disney #pervertkimmel https://t.co/bq5WE4eyOP

I vote for whichever one best helps you trivialize the horrors of Harvey Weinstein by comparing them to televised comedy bits in which every woman was a willing participant who gladly signed a release https://t.co/6jlpRqtttY

You are a bully attacking the First Lady of the USA. Attack me any time you want. Attack @realDonaldTrump anytime you want. Suck up to Obama all you want. Having 18 year old girls grab your crotch is creepy and perverted. How would you feel if it was your daughter Harvey Jr? https://t.co/uuddgKAZJl

Harvey Jr, you have over 100 writers (you are in last place) That’s all you have? #KeepUp. You are a poor man’s Colbert. #pervertkimmel https://t.co/7H0V2IYJEK

I was number one for all of Cable news in 2017 and the number one most watched show in the first Qtr of 2018. And both Hannity and @MaddowBlog kick your ass every night Mr Weinstein jr on ABC @Disney. And Fallon and Colbert also kick your ass. Perverts like you fail on TV. https://t.co/KP9SAXtNwV

Since you deleted your tweet, I'll ask again. "Would you want your daughter being “grabbed by the pussy”? Yes or no? pic.twitter.com/lLTZ2zMLpb