NEXT:CNN Is Most Polarizing Media Brand for 2018
PREVIOUS:Fox News's Differing Takes on the Mueller Firing Report 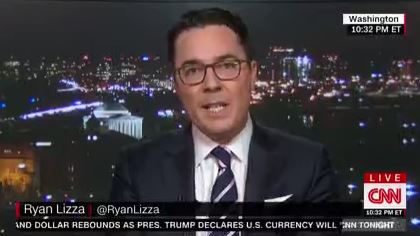 While his nearly 7-week absence during a sexual harassment probe wasn’t mentioned on air, WaPo’s Erik Wemple heard from CNN about Lizza’s return. “Based on the information provided and the findings of the investigation, CNN has found no reason to continue to keep Mr. Lizza off the air.”

On Dec. 11, it was revealed that The New Yorker fired Lizza over an accusation of improper sexual conduct. “We have reviewed the matter and, as a result, have severed ties with Lizza,” the publication said.

CNN followed with its own statement: “We have just learned of the New Yorker’s decision. Ryan Lizza will not appear on CNN while we look into this matter.”

Lizza followed, denying anything inappropriate: “I am dismayed that The New Yorker has decided to characterize a respectful relationship with a woman I dated as somehow inappropriate. The New Yorker was unable to cite any company policy that was violated. This decision, which was made hastily and without a full investigation of the relevant facts, was a terrible mistake,” he wrote last month.