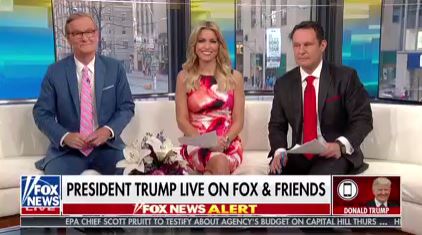 President Trump phoned into Fox & Friends for a 30-minute, live, commercial-free interview this morning. The topics ranged from Ronny Jackson, to James Comey, to Kim Jong-un, to Kanye West, to Shania Twain, to Anderson Cooper.

When asked about last week’s release of former FBI director James Comey’s memos about his meetings with Trump, the President pivoted to CNN and Hillary Clinton.

“Look, Comey is a leaker and a liar. He’s been leaking for years,” Trump began, adding, “He does these memos, and then fake news CNN, who’s a total fake, they give Hillary Clinton the questions to the debate. Nobody…can you imagine, by the way, if you gave me the questions to a debate? They would have you out of business and they would have me, ‘you better get out of this campaign.’ They don’t even bring it up. I mean CNN. Fake news CNN actually gave the questions to…”

“Yeah, but don’t worry about them,” Brian Kilmeade interjected.

Later, Trump talked about the coverage of him. “You guys don’t always treat me great, but you treat me fairly. It’s not like Fox is perfect for me. They’re not. They’re tough. But at least it’s fair. When you look at some of the others, like CNN they have a council of seven people and of the seven people everyone is against me. Where do they get these people?”

“I’m not your doctor Mr. President, but I would recommend you watch less of them,” said Kilmeade. “I don’t watch them at all. I watched last night. I watched leakin’ lyin’ Comey last night, I hated to do it,” Trump said.

“I will say this, Anderson Cooper was surprisingly tough, and he did a good job.”

Some other issues that came up: