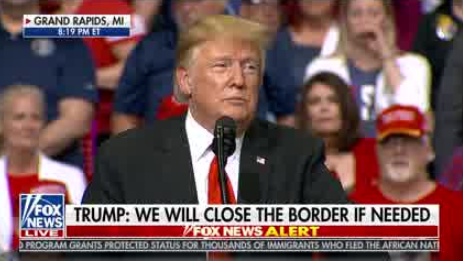 President Trump has announced that he will once again skip the White House Correspondents’ Association annual dinner, making that three consecutive years he has bucked tradition and decided not to attend.

Trump says he will hold a rally at a one of three undetermined locations rather than attend the event, which he called “so boring and so negative.”

Last year, President Trump declared the dinner “dead” after comedian Michelle Wolf made some jokes that didn’t go over very well with the administration and many in the political press.

In response to criticism from the D.C. press, the WHCA late last year announced that presidential historian and author Ron Chernow would be this year’s speaker, breaking from the tradition of hosting a comedian who typically skewers the president and others in Washington. Many will recall how Trump was famously the subject of several jokes from comedian Seth Meyers and then-President Obama at the 2011 dinner, which he attended, for his incendiary remarks about Obama’s birthplace.

The commander in chief and the political press have always had an adversarial relationship. But what we’ve seen over the past two-plus years is next level.

Case in point. From this afternoon:

The press is doing everything within their power to fight the magnificence of the phrase, MAKE AMERICA GREAT AGAIN! They can’t stand the fact that this Administration has done more than virtually any other Administration in its first 2yrs. They are truly the ENEMY OF THE PEOPLE!

In response to coverage he views as unfair, President Trump has said on the record how he only sees “the fake news media” is the “enemy of the people,” not all of the media. This time around he seems to be referring to “the press” as a single entity.

So yeah, this doesn’t seem like a person particularly interested in honoring the First Amendment at this point in time.