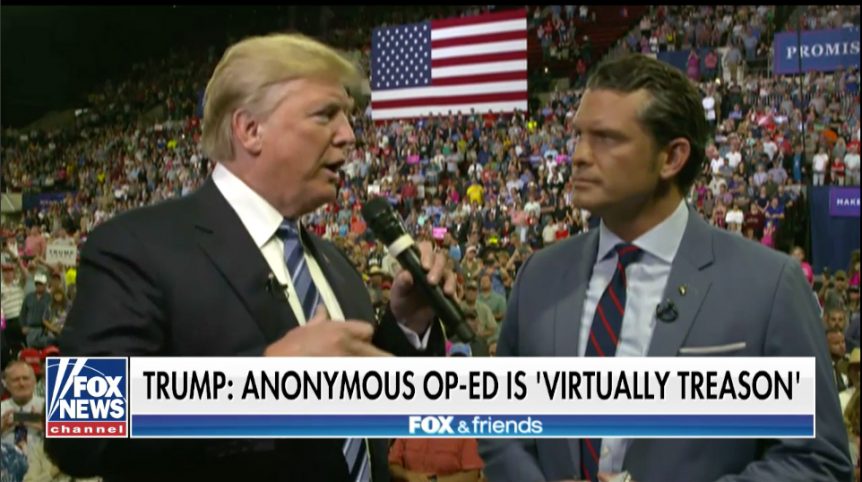 President Trump touched on many of the issues he’s been tweeting about all week—the New York Times’ explosive, anonymous op-ed piece, Nike’s new ad with Colin Kaepernick and Bob Woodward’s upcoming book about him—when he spoke with Fox News’ Pete Hegseth before his rally in Montana last night.

In the interview, which aired on Fox & Friends this morning, Trump said that the New York Times committed “treason” by publishing the op-ed, which was written by someone in his administration:

Trump: Well number one, the Times should have never have done that because really what they’ve done is, virtually, you know it’s treason. You can call it a lot of things, but to think that you have somebody in all of the cabinets – some many people as you know they came forward, they’re writing editorials. They’re all saying you know it’s got to be at a fairly low level. Because so many people today, I was just coming out, and I see all the people that are saying such great things. We have a lot of love in the administration, and the White House is truly as you would say, a well-oiled machine – it is working so well. You know we have – I heard you say yesterday, we have thousands of people that in theory could qualify. So they take one person out of thousands, but what’s unfair – I don’t mind when they write a book and they make lies cause it gets discredited. We just discredited the last one, we discredit all of them because it’s lies. But I’ll tell you, when somebody writes and you can’t discredit because you have no idea who they are – usually you’ll find out, it’s a background that was bad, it may not be a Republican, it may not be a conservative, it may be a deep state person that’s been there a long time. You don’t know where – it’s a very unfair thing. But its very unfair to our country and to the millions of people that voted, really for us. They voted for us.

As the NFL season kicked off last night, Hegseth mentioned Nike’s new ad with Kaepernick, who had led the NFL protests during the national anthem two years ago—the ad aired during last night’s game—and asked Trump. “who’s going to win this cultural showdown of standing for the anthem?”

Trump: We are. We are going to win. I don’t know what the NFL is doing. Honestly, I don’t know what the NFL is doing. From what I understand it’s in contracts that you have to stand for the national anthem. In fact they have something where it says you will stand, you will have the helmet on the ground and the hand on the heart. That’s what it says. I don’t know why they’re not enforcing it. And in cases where they don’t have it, you know they had a new thing where, they don’t have to do that, you don’t have to kneel, you can go back into the locker room. I think that’s worse than kneeling in a certain way, you’re going back in. That shows that you just have no respect for the anthem and the flag. I don’t like what Nike did. I don’t think it’s appropriate what they did. I honor the flag. I honor our national anthem and most of the people in this country feel the same way. They feel the same way.

Hegseth asked Trump to confirm what his lawyer Rudy Giuliani told the AP yesterday, that he would not be answering any of Robert Mueller’s questions, either written or in person, about possible obstruction of justice.

“Look, there’s no collusion, even in these crazy books they don’t talk about collusion,” said Trump, seemingly referring to Woodward’s upcoming book about his administration, Fear: Trump in the White House. The president never answered Hegseth’s question, instead talking about Russia and China before steering the interview back into a critique of the media. “The level of unfairness and bias in the press is actually incredible. But in the meantime we’re winning folks, be happy because we’re winning.”