Univision unveiled a new studio for its flagship evening newscast Noticiero Univision on Monday, the morning before its 2021 virtual upfront presentation , and it has received rave reviews, both from talent and management alike.

Below are some images. 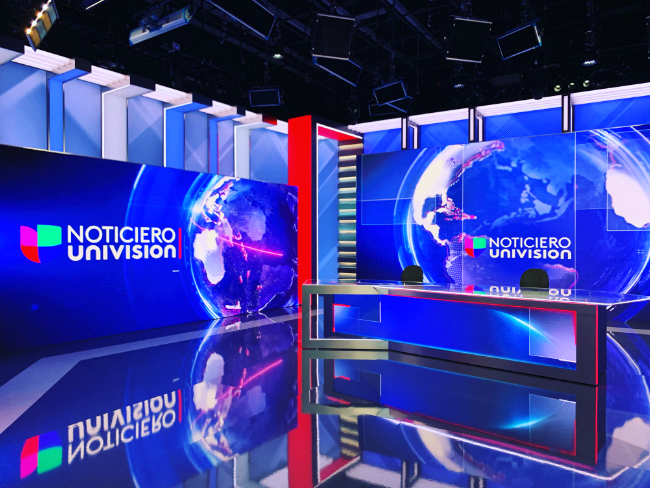 “The new studio reflects the changes that have been occurring all around us,” Univision svp of content production design Jorge Dominguez tells TVNewser. “How we engage with our audience using new technologies and how we communicate and inform them through our storytelling is at the forefront of our production. We don’t want the talent sitting stoically at the desk all the time, but rather being able to walk the viewer through a story and use their full body and emotion to engage with our viewers.”

Dominguez added that the new set tries to maximize the available space with “an almost 360 design …  It also capitalizes on our advantage of having the newsroom next door. We intentionally extended the studio into the newsroom, not just as a background, but as a working space.” 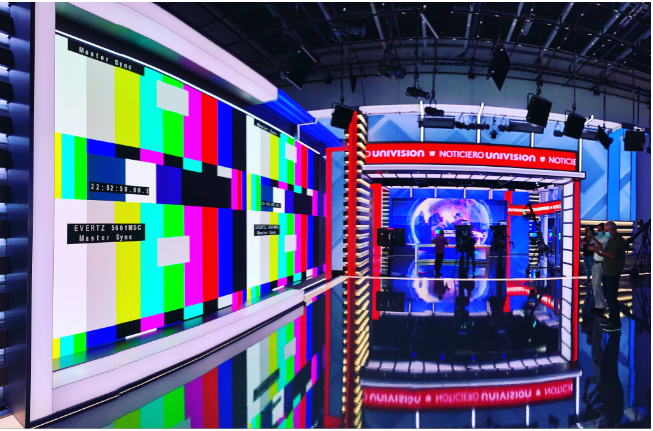 According to Univision News president Daniel Coronell, coming up with and executing the plan to integrate state-of-the-art technology into the new studio took “several months,” adding, “We focused on finding new tools that allow to better tell the stories and present the information our audiences need. Our team achieved its goal and created a studio that graphically enhances the presentation of the full, accurate and contextual reporting that makes Univision News the preferred source of news of the Hispanic community.”

So, what does talent think about their new digs? They love it.

“It is like having a new toy for Christmas!,” says Noticiero Univision anchor Patricia Janiot. “It is brighter, bigger, better, and our five screens make it easier to tell and show stories in a more innovative and versatile way.”

Ilia Calderón told us that the studio “feels like a new beginning,” and, “as the world expands in the way we communicate, we also need to keep up with the changes in order to continue informing our audience with the latest and most up to date technology. Augmented reality and interactive graphics, along with multiple HD screens, allow us to go beyond the story and provide viewers all the details and extra visual elements that really make a difference in storytelling, while maintaining our newsroom standards and commitment to our viewers.”

Jorge Ramos feels that the studio “reflects the need for a new way of communicating the digital era,” and that, “we in the traditional media are competing with hundreds of platforms and we have to show that we can do it better and with more credibility. That’s our competitive advantage. It doesn’t make my job easier. It’s more complicated on the air and it requires full coordination with a large team. But it signals the end of the traditional anchor. No more talking heads. Now it’s more like surfing from platform to platform and even within a huge studio, one of the largest and most sophisticated in the country.”