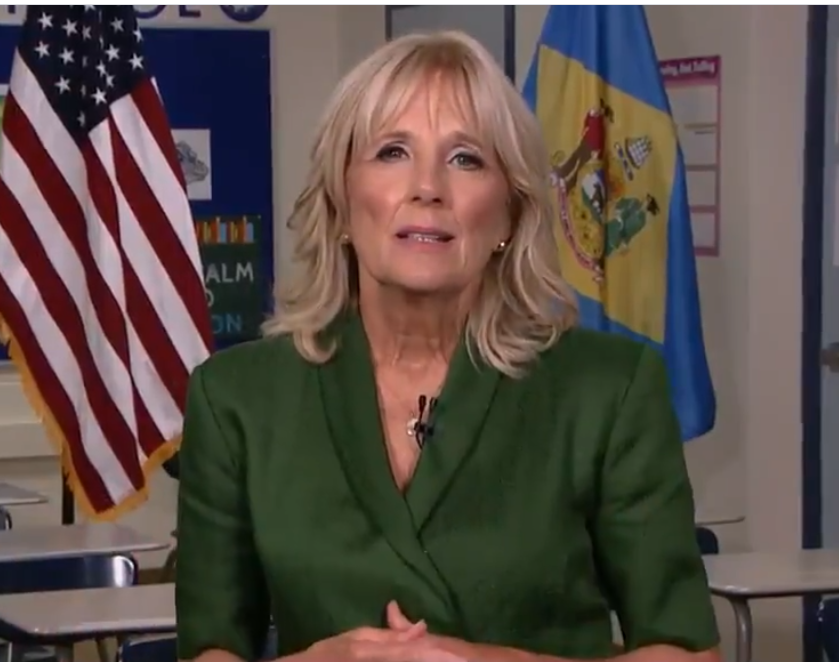 Night 2 of the 2020 Democratic National Convention might not have delivered the punch that first lady Michelle Obama did on the opening night, but a strong case can be made that its lineup of speakers was deeper.

Biden’s wife, Dr. Jill Biden, closed the evening with some poignant remarks about her husband from the Delaware high school at which she taught from 1991-1993.

“We have shown that the heart of this nation still beats with kindness and courage,” she said. “That’s the soul of America Joe Biden is fighting for now.” She added: “If you listen closely, you can hear the sparks of change in the air. … Americans of all walks of life are putting their shoulders back, fighting for each other. We haven’t given up”

The directors of this @DrBiden video are Julie Cohen & Betsy West, who were nominated for an Oscar for “RBG”

Remarks from former president Bill Clinton were more fiery than those from the former second lady. Clinton slammed the president’s response to the pandemic. “Our choice is Joe Biden. At a time like this, the Oval Office should be a command center. Instead, it’s a storm center. There’s only chaos. One thing never changes: His [Donald Trump] determination to deny responsibility and shift  … the buck never stops there,” he said.

Sen. Bernie Sanders was formally nominated by the aforementioned Rep. Ocasio-Cortez, who promoted the progressive movement within the Democratic Party during her remarks. She shared a positive message in support of Biden later in the evening.

Congratulations, @JoeBiden – I deeply look forward to fighting for our future together and reclaiming our democracy in November.

Thank you @DemConvention for having me deliver Sen. Sanders’ roll call nomination speech.

The opening keynote wasn’t a traditional one. It featured videos from 17 new state senators and representatives from across the nation, talking about why they ran for local office, the issues they support and why they support Joe Biden. Former Georgia gubernatorial candidate Stacey Abrams also checked in, remotely.

Actress Tracee Ellis Ross, best known for her role on ABC’s Black-ish, then joined the broadcast as the moderator of Night 2, beaming in from Los Angeles to provide opening remarks.

A virtual roll call followed, and it was perhaps the most interesting part of the convention.

Delaware initially passed on its nomination (so they could go last). At the conclusion of the video, per convention tradition, the nominee’s home state, Delaware, put Biden over the top. Gov. John Carney and Sen. Tom Carper beamed in from the Amtrak station in Wilmington, Del., a station to which Biden famously rode home each night to be with his family while serving in the Senate.

The Delaware senator-turned vice president, Biden was officially nominated as the Democratic presidential candidate—and the DNC video showed a nationwide virtual party for him, with delegates in all U.S. states and territories celebrating. Biden accepted the nomination from a high school library where his wife taught, joined in person by Jill Biden and his grandkids.

It is the honor of my life to accept the Democratic Party’s nomination for President of the United States of America. #DemConvention

WATCH: Joe Biden is officially nominated as the Democratic presidential candidate — and the DNC shows a nationwide virtual party for him, with delegates in all U.S. states and territories celebrating https://t.co/tFT8FVSwQb pic.twitter.com/jaMHGZISfS

Needless to say, this television production maneuver of going state to state, many times live, was far from easy. In a sign of the socially distanced times, many appeared solo to speak or with people who stood far apart and many wore masks.  There were some technical hiccups but overall it moved briskly.

A speaker from one state even came with a plate of calamari (we’ll expound on that later).

What did the media Twittersphere think of Night 2? There was love for the roll call:

This #DemocraticConvention #RollCall is a real treat to watch as it is making the nomination much more personal and takes us to parts of our country most don’t get to see. This feels like a nomination coming from the country rather than canned event in loud hall. #WellDone

They should keep this roll call! It’s like the Olympic parade of nations which I so missed this year

a powerful moment at @DNC convention from someone who cannot speak except by a computer – disabilities activist and advocate ⁦@AdyBarkan⁩ pic.twitter.com/o3sI7MfWX6

This DNC virtual roll call is one of the first examples of a convention aspect that seems stronger than the traditional way of doing things. It’s fascinating to see the diversity of the United States and Americans in so many places with cultural and geographic differences.

This segment about Jill Biden is hokey and Boomerish and I like it.

Text Message sent to me about @DrBiden: “They should have shown the video of her shoving that crazy lady.”

With a powerful speech by Jill Biden, this convention just took a sharp turn toward hope.

Rhode Island, knowing it will never get a College Gameday, brought it for the DNC. pic.twitter.com/56aCu7NTeA

Dr. Biden’s walk to a camera cut got a well-deserved shout out.

The walk and talk, pause and turn to a second camera by Jill Biden was an impressive execution of a legitimately difficult tv thing

I loved it, but also imagine showing this specific image to someone last year: “Check out next year’s DNC!” https://t.co/15sJ5rKyBY