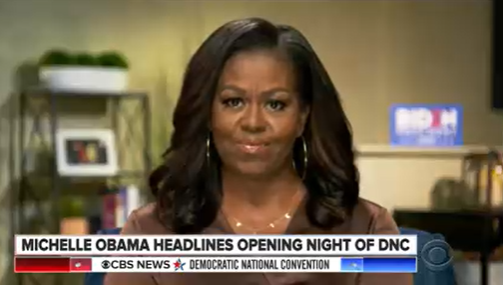 The opening night of the 2020 Democratic National Convention was unorthodox due to its virtual format. However, the event was well-produced—all things considered—and concluded with what most TV newsers agreed was a stirring keynote address from former first lady Michelle Obama.

The broadcast’s only noticeable technical glitch came from the remote setup of South Carolina Rep. Jim Clyburn. At 9:40 p.m. ET, Clyburn beamed in from an outdoor location in Charleston, and the House majority whip appeared to recover from the glitch quickly.

We’re not even an hour into the #DemConvention and Jim Clyburn just has the first technical difficulties of the convention. pic.twitter.com/J5JeUdRP2r

Clyburn’s remarks were inspirational, and he said the presumptive nominee Joe Biden is “as good a man as he is a leader.”

Rep. Jim Clyburn: “Joe Biden is as good a man as he is a leader. I have said before and wish to reiterate tonight, we know Joe. But more importantly, Joe knows us.” #DemConvention https://t.co/f4hSCWZoSM pic.twitter.com/F4cLC863PJ

That wasn’t the only signal issue on Monday evening. There was also a technical glitch during a remote appearance on MSNBC’s preconvention coverage at around 7:30 p.m. ET. The issue lasted 5 minutes, which is a rather long time.

DNC production hubs are in New York, Los Angeles (where the moderators will beam in from), Milwaukee (original site of the DNC) and in Biden’s Wilmington, Del., stomping grounds.

Biden will be joined by his running mate, California Sen. Kamala Harris, in Delaware. Harris and Biden will deliver their speeches later in the week.

Actress Eva Longoria served as convention emcee for opening night. Originating from a Los Angeles studio, she spoke with a number of men and women in various parts of the country to talk about their daily struggles. Before spotlighting the night’s high-profile speakers, Biden hosted a video roundtable on social justice. A moment of silence was held for George Floyd, with his brothers Philonise and Rodney Floyd speaking from Houston tonight in support of Biden, saying:

“My brother George was selfless. He always made sacrifices for his family, friends and even complete strangers. George had a giving spirit. A spirit that has shown up on streets around our nation and around the world. People of all races, all ages, all genders, all backgrounds, peacefully protesting in the name of love and unity.”

“We must always find ourselves in what John Lewis called ‘good trouble.’ For the names we do not know, the faces we will never see, those who can’t mourn because their murders didn’t go viral. Please join me in a moment of silence to honor George and the many other souls we lost to hate and injustice, and when this moment ends, let’s make sure we never stop saying their names.”

Washington Mayor Muriel Bowser and Clyburn were other high-profile figures who spoke in the 9 p.m. hour.

New York Gov. Andrew Cuomo gave a 5-minute address, beginning at 9:44 p.m.. After he spoke, it was time for Kristin Urquiza, a woman whose father died from coronavirus. She had been a Trump supporter. Her remarks included the line: “His only preexisting condition was trusting Donald Trump and for that, he paid with his life.”

Kristin Urquiza, whose father died from coronavirus and was a Trump supporter, delivered a speech tonight at the DNC and said: “His only preexisting condition was trusting Donald Trump and for that, he paid with his life.” — Yamiche Alcindor (@Yamiche) August 18, 2020

“His only preexisting condition was trusting Donald Trump and for that, he paid with his life.” Powerful DNC moment with Kristin Urquiza, whose dad died from coronavirus

The broadcast networks entered at 10 p.m. ET. For CBS, the first few minutes of the 10 p.m. hour included CBS Evening News anchor Norah O’Donnell summarizing the first hour, briefly introducing CBS political reporters. John Dickerson provided a couple minutes of analysis, as the network showed Michigan Gov. Gretchen Whitmer giving her remarks on a split-screen. ABC and NBC took Gov. Whitmer full-screen, before throwing to studio coverage at the conclusion of her remarks. CBS returned to studio coverage after Gov. Whitmer’s remarks, and later on CBSN, Major Garrett said he was watching the DNC for “technology, humility and humor.”

ABC World News Tonight anchor David Muir remarked during the broadcast, “It will be a production feat over the next couple nights, but I don’t think they want to take away from how stark this moment is. This pandemic, 30 million Americans out of work, and this long-overdue fight. They will take on these hard issues, and we’ll hear about the issues in fact right here on night one.”

Throughout the hour, the broadcast networks covered the major speakers’ full video remarks in full-screen, whereas other portions of the DNC video were shown in a split-screen with the studio coverage. Multiple Republicans spoke, including former Ohio Gov. John Kasich, just after the 10 p.m. hour, former New Jersey Republican Gov. Christine Todd Whitman, former Hewlett Packard CEO Meg Whitman, who ran for governor as a Republican in California in 2010 but supported Hillary Clinton in 2016, and former New York Republican Rep. Susan Molinari prior to Kasich’s remarks.

President Trump’s former chief of staff Reince Priebus, a CBS News contributor for these events, had a slightly different take on everything: “I think if the Democrats want to try to portray a group of Republicans as defectors to illustrate to the American people, they will probably have to do a little better than John Kasich who has been trashing President Trump on another cable network for the past several years.”

Sen. Bernie Sanders and Michelle Obama closed the night. The former first lady gave an especially impassioned speech (which, it should be noted, was pre-taped).

Fox News’ The Daily Briefing host Dana Perino‘s reaction to the first lady’s address: “Very difficult to connect with an audience without an actual audience there with you, but she has the ability to connect with people through the screen. You just got the sense that when you talk about authenticity and she has it in spades. She has that voice, she has clarity and she knows what she was out there wanting to do. She was trying to get everybody to really focus and she had a call to action. Ask for your ballot tonight. I think if the DNC looks over the course of the night, the first virtual convention of our history, I think they would say Michelle Obama stuck the landing.”

Valerie Jarrett said on CBS: “She was the spouse of the nominee but she was also experiencing what it feels like to have racist and sexist tropes directed at her similar to what Senator Harris is going through right now. After eight years she spoke again, she had worked hard to earn the respect of the American people, many fell in love with her. But now after she’s been out of the White House, she is now Michelle Obama in her own right, a global figure, a global leader, immensely popular and people respect and trust her. And so to use that platform, to use her voice to be able to full throatedly endorse and support Joe Biden, as you said earlier, talking about both his competency, his intellect, his ability to have a deep and abiding character—and empathy in listening, she is very excited is all I can say.”

Fox News Sunday moderator Chris Wallace added: “I agree with Dana. It’s interesting Michelle Obama as she said doesn’t like politics and she said that this speech was her main contribution to the Biden campaign. It was a heck of a contribution. She really flayed, sliced and diced Donald Trump talking about the chaos and confusion and lack of empathy especially coming from this president and this White House.”

ABC Nightline anchor Byron Pitts: “I think [Michelle Obama’s speech] is the most important speech tonight, likely the third most important speech of the week. … I think tonight, she speaks specifically in many ways to professional women, to suburban women, to women of color and to young people of color, that she can say that, look, that Biden/Harris may not be everything that you want, but trust me, they will get us where we want to be. People forget she was Barack Obama’s not so secret weapon when he ran for president and, I think, she can be that, will be that for the Biden/Harris ticket.

Michelle Obama masterfully proved that a powerful and effective speech can be delivered even better without a live crowd applauding every other line.

Look at the words she aimed at Trump … very simple, nothing cruel or personal—and all the more effective because of it.

Friend of mine just texted, “If such a thing is possible, Michelle could have just won this election for Biden.”

She is goooooood. Maybe they should have given her a slot on the last night?#DemConvention

“A president’s words have the power to move markets. They can start wars or broker peace. They can summon our better angels or awaken our worst instincts. You simply cannot fake your way through this job.”#DemConvention pic.twitter.com/ZH1EDg28Al

And never to sit anything out, the president weighed in:

Somebody please explain to @MichelleObama that Donald J. Trump would not be here, in the beautiful White House, if it weren’t for the job done by your husband, Barack Obama. Biden was merely an afterthought, a good reason for that very late & unenthusiastic endorsement…..

….My Administration and I built the greatest economy in history, of any country, turned it off, saved millions of lives, and now am building an even greater economy than it was before. Jobs are flowing, NASDAQ is already at a record high, the rest to follow. Sit back & watch!

The Twitter reactions to the event itself were mixed:

This is a good effort by the DNC, but you can already tell that a virtual convention is going to be tough.

Despite some awkward moments, it’s clear this format has some big advantages:

Wow this convention is moving. It has more speaking roles than Game of Thrones.

It was quiet in downtown Milwaukee, where the DNC was supposed to have taken place:

MILWAUKEE. Downtown, where the Democratic convention was supposed to be held. The arena is fenced off, some police are guarding potted plants, and the streets are empty.

Fox News contributor Ari Flesicher took a shot at CNN and the virtual nature of the convention:

CNN is showing live DNC videos from the “convention.” I can’t wait to see if they play RNC/Trump videos live.

This is absolutely terrible

You can’t fake character. @JoeBiden has character. And tonight, that broke through. #DemConvention pic.twitter.com/e5nVn1osLP

We had to end with this gem from the Michigan governor: