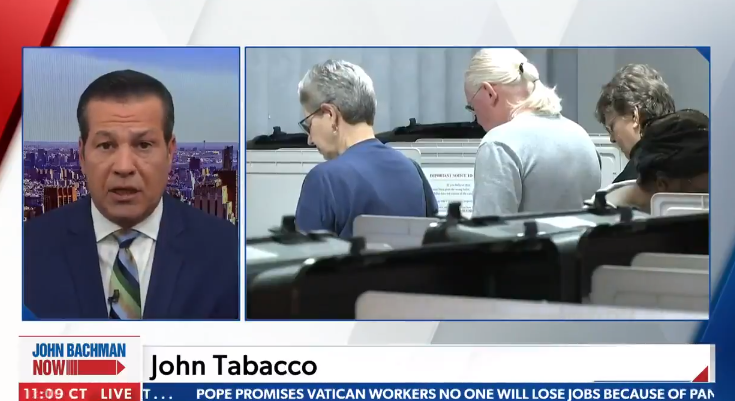 Newsmax issued an on-air clarification on Monday concerning its own coverage of voting software company Smartmatic and Dominion Voting Systems, and their connection to the 2020 U.S. presidential election after being tagged with legal threats.

Newsmax just aired this note to “clarify” its coverage of Smartmatic and Dominion. pic.twitter.com/I5XZ7CQpAk

Legal representation from Smartmatic and Dominion have threatened lawsuits against the Trump campaign, his attorneys, and the news outlets which amplify these conspiracy theories in recent days, saying that these false claims are having a damaging effect on the respective companies. Smartmatic has said that it may sue Newsmax, OANN and Fox News for defaming the companies and spreading conspiracy theories about them.

In his Sunday New York Times media column, Ben Smith wrote about the potential for a lawsuit:

These are legal threats any company, even a giant like Fox Corporation, would take seriously. And they could be fatal to the dream of a new “Trump TV,” a giant new media company in the president’s image, and perhaps contributing to his bottom line. Newsmax and OAN would each like to become that, and are both burning money to steal ratings from Fox, executives from both companies have acknowledged. They will need to raise significantly more money, or to sell quickly to investors, to build a Fox-style multibillion-dollar empire. But outstanding litigation with the potential of an enormous verdict will be enough to scare away most buyers.

Newsmax chief executive officer Chris Ruddy told Adweek in November that his company is not for sale, but that it is getting offers.

“Through the years, I’ve been approached by various people that either want to invest or buy Newsmax, and I always find that very flattering,” Ruddy told Adweek. “But we have focused on growing the company. I think we’re going to become a very powerful news property in the television world and online than maybe we already are.”