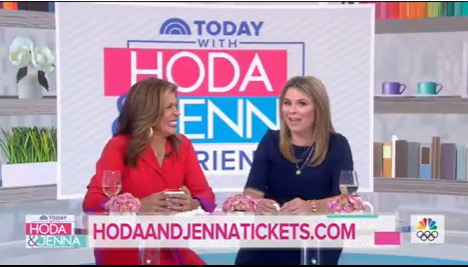 Hoda Kotb and Jenna Bush Hager will host the 10 a.m. hour of Today show – Hoda & Jenna – in front of a live, in-studio audience twice per week, starting in February.

The twice-weekly shows will be named Hoda & Jenna & Friends.

The 10 a.m. hour will make use of Studio 6A, the former home of Megyn Kelly Today that is now being used for the Friday broadcasts of MSNBC’s All in With Chris Hayes, which now feature a live audience.

Why do Hoda & Jenna need a live audience in the first place?

“The ladies having an audience will make them better at what they do.  There’s a certain energy when you perform on stage, when you have people react to what you are doing. Having a live audience will allow for new interactive segments that involve games or instant reactions. I think that the audience is really going to change things up and I can’t wait for Hoda and Jenna to get to meet the best friends they don’t know they have.”

NBC News sees February as something of a relaunch for the program, as both women went on maternity leave at different points of 2019.

Kotb took maternity leave soon after Hager joined the program on a full-time basis last spring, and Hager then departed in August for similar reasons. Kotb returned to Today in September and Hager in November.

According to NBC News, since Kotb and Hager got back together in November, viewership for their hour has improved drastically. According to Nielsen, Today’s 10 a.m. hour has seen +14% growth among adults 25-54, and +11% growth in total viewers. That’s huge growth for a morning show.

Installing a twice-weekly live audience is just one of a number of changes NBC has made to its legendary morning show franchise. After Kelly left, Craig Melvin, Sheinelle Jones, Al Roker and Dylan Dreyer took on the 9 a.m. hour (and have delivered strong ratings growth in the process). And just last week, NBC News White House correspondent Kristen Welker was named co-host of Weekend Today – which airs Saturdays – joining her D.C. colleague in New York, Peter Alexander.