The highest-rated host on cable news, Tucker Carlson finds himself embroiled in controversy once again, this time after targeting NBC News investigative reporter Brandy Zadrozny in a segment on his show Wednesday night.

“Her job is personally seeking out and identifying information about anonymous Trump supporters online,” Carlson said of the NBC Newser, who is apparently working on a story about disinformation and using public records to confirm identities of people who create harassment campaigns.

Carlson brought on Revolver News journalist Darren Beattie, who proceeded to accuse Zadrozny of “doing everything she can to unearth anonymous Trump supporters basically so she can ruin their lives.”

“Why would NBC News be doing something like this?” Carlson asked Beattie.

Beattie said journalists like Zadrozny are looking to “crush the rebellion of the American people against their corrupt ruling class associated with the victory of Donald Trump.”

Zadrozny’s employer fired back at Carlson via statement: 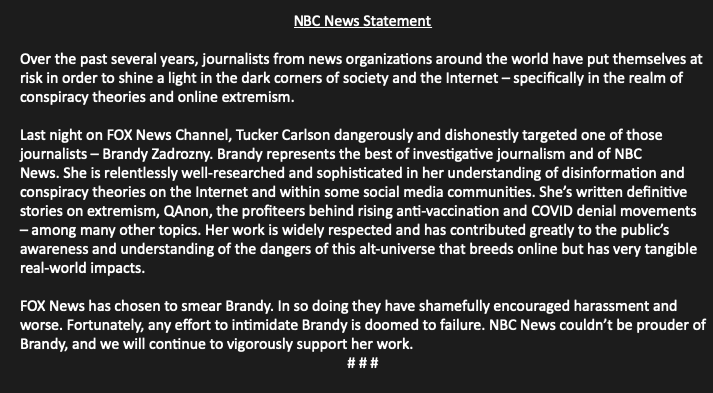 Tucker Carlson is devoting an entire segment to attacking my colleague, Brandy Zadrozny, for doing actual reporting, like using public records to confirm identities of people who create harassment campaigns.

Had Tucker looked into this, his guest was emailed by Brandy the day before about a story she’s doing about his website. He spent the day tweeting retributively at her.

That wasn’t mentioned. Seems pretty important to include.

And the guest is this guy.https://t.co/4ch48quUZZ

Anyways, that was a hideously unethical segment by Tucker Carlson, framing using basic reporting tools like public records searches as some sort of evil act.

To do it to a mom, and one of the best people I know, is disgusting. I won’t forget it.

In conclusion, the guy who Tucker had on his show to rail against Brandy for being a reporter had this incredibly normal image of her made for his site today.

I think it’s pretty badass, personally. Making it is not normal, but I think she should frame it. pic.twitter.com/Z8zPcerO0Q

We will update this item once we receive comment from Fox News.