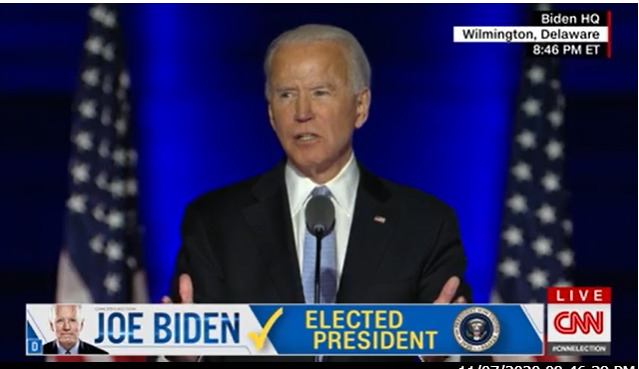 CNN has been the most-watched network for continuing coverage of the 2020 presidential election, and that sterling performance culminated on Saturday, as the network earned by far the most viewers of any television news network for its coverage of President-Elect Joe Biden‘s televised Saturday night address to America.

According to Nielsen, from 8:30-9 p.m. ET, 35.1 million Americans watched Biden’s and VP-Elect Kamala Harris‘ prime time speeches across 6  of the Nielsen-measured networks that televised the speeches. 13.6 million of them watched on CNN.

NBC and Fox TV also televised the speeches, but their data wasn’t made available by Nielsen. NBC broke into coverage of Clemson-Notre Dame college football broadcast to show the speeches, and then went right back to the game as soon as Biden’s speech ended.

CBS was the No. 1 broadcast network for coverage of their respective speeches.