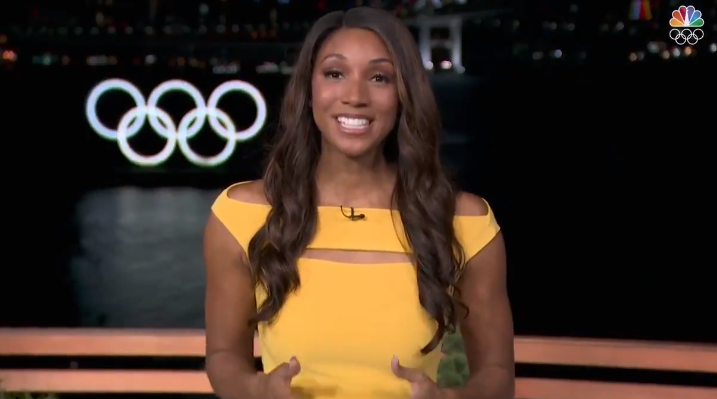 It’s official: Maria Taylor is now a member of the NBC Sports family, and she’s hitting the ground running as an Olympics host and correspondent.

In addition to covering the Tokyo Games these next couple of weeks, Taylor will also serve as a contributor for Football Night in America and NBC’s Super Bowl coverage.

“Maria has excelled in a wide range of roles at marquee events, and will be a powerful addition to our team,” NBC Sports chairman Pete Bevacqua said in a statement. “We are always looking to improve, and Maria is going to make us better. We are very excited for her to join us right away in Tokyo.”

Taylor added, “Incredibly excited to have the opportunity to work with Pete, Molly, Sam, Fred, and the entire NBC Sports family. Literally, hosting the Olympics, Football Night in America, and the Super Bowl is what I dreamed of when I started in television – and this would not be possible without standing on the shoulders of all of those who came before me and made this path possible. And I plan to pay it forward.”

The versatile sports newser comes to NBC after spending nearly a decade at ESPN, where she most recently hosted the NBA Finals on ABC earlier this week.

Taylor became a high-profile personality at ESPN in recent years. In addition to hosting NBA Countdown, she was the lead sideline reporter for the network’s college football national championship broadcast. She also hosted ESPN’s coverage of college volleyball, and college men’s and women’s basketball.

Taylor’s departure from ESPN came just weeks after a private tape of leaked comments were reported by the New York Times in which fellow NBA host and reporter Rachel Nichols alleged ESPN gave Taylor the NBA Finals studio hosting job to make up for what Nichols described as the network’s “crappy longtime record on diversity.” Nichols was unaware that her conversation about this matter with LeBron James‘ PR advisor, Adam Mendelsohn was being recorded, and the audio was leaked by an ESPN employee who no longer works at the network.

Maria Taylor makes her NBC debut during the Olympics. pic.twitter.com/syEj42xquU