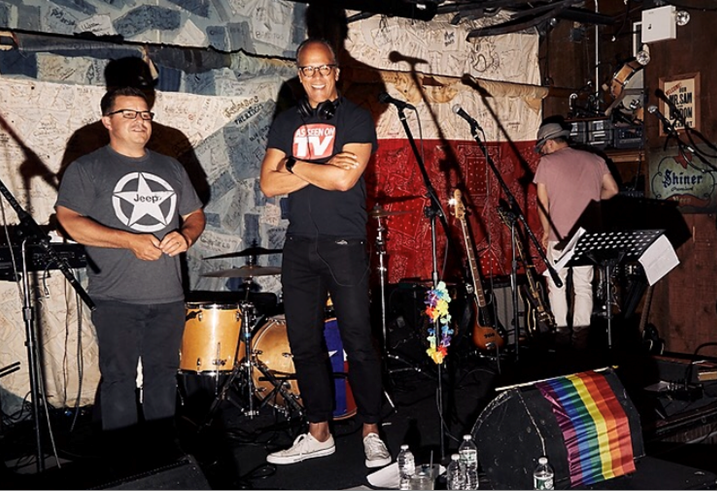 If you’re a regular reader of TVNewser (and/or an NBC News staffer) you’re aware of Lester Holt‘s passion for music.

Well, the NBC Nightly News anchor /Dateline NBC co-host’s passion caught the attention of the New York Times, and his “rock star” side was featured in yesterday’s Sunday Style section.

The Times caught up with Holt and his band, The Rough Cuts (consisting of Dateline colleagues) on the final Sunday of June during a rehearsal at the Texas-themed Manhattan restaurant Hill Country. The band was rehearsing for its fifth performance at the Flatiron neighborhood venue.

While the majority of the audience in attendance were NBC employees, not all were.

Skei Saulnier, who described herself as “legit Cherokee,” had brought her daughters Ella, 11, and Leai, 10, from Virginia. “I’ve been watching NBC’s ‘Nightly News’ since I was 5 or 6,” she said. “In my home, the anchors were celebrities.”

As he is on the newscast, Holt is apparently low-key and unassuming on-stage, even while performing Talking Heads’ Psycho Killer.

If your band consists of Dateline staffers, Psycho Killer has to be on the set list, right?

According to Hicklin, Holt is also a lifelong musician whose love affair with music started at a concert by Carmen McRae as a teenager. It has been 45 years since Holt saved enough money from a job delivering newspapers in Sacramento, where he grew up, to buy his first guitar, a knockoff Fender Jazz that cost $60 in a pawnshop.

Holt isn’t the only TV newser with a passion for music.

Joe Scarborough and his band regularly perform at New York venues Prohibition and The Cupping Room. Scarborough put out a five-track EP, Mystified, in 2017, and he has even performed on The Late Show with Stephen Colbert, as well as The View.

Additionally, on the eve of the White House Correspondents Dinner last April, Chuck Leavell, the keyboardist for the Rolling Stones, jammed with bands led by Steve Liesman, the CNBC senior economics reporter; Michael Siconolfi, a Wall Street Journal senior editor; and Tom Toles, a cartoonist for The Washington Post.

“I’m at the top of my profession,” said Holt. “There’s nowhere else to go, but I don’t want this to define who I am. If this job ever went away, I’m still me, I still have so much more to give, and doing this music thing is a symbol of that.”