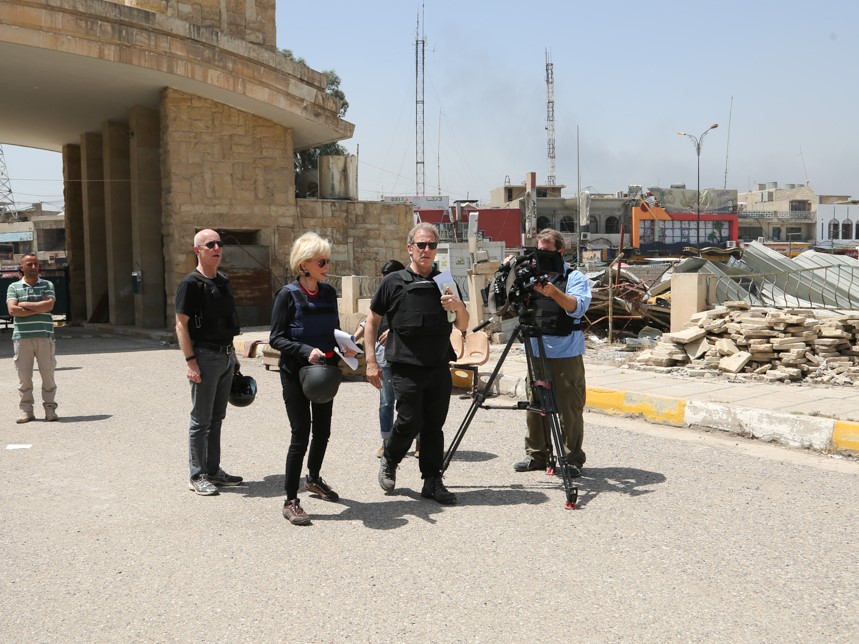 This is the second installment of The Producer I Can’t Live Without, a recurring TVNewser feature in which prominent TV newsers and their longtime producers talk about their successful partnerships. The first featured NBC Nightly News anchor Lester Holt and Kim Cornett.

For this installment of The Producer I Can’t Live Without, we spoke with 60 Minutes correspondent Lesley Stahl and her longtime producer Richard Bonin. Stahl and Bonin have worked together since 1995, one of the longest team tenures in 60 Minutes history.

“I honestly believe we have a great collaboration, even though we do fight a lot,” Stahl told TVNewser. “Our stories end up, I think, being successful and I’m, almost always, 99% proud of the stories we do together.” 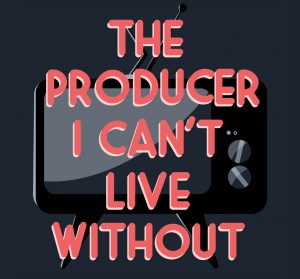 It’s rare for a high-profile talent to work with the same producer for so many years, so we thought it would be interesting to hear from Stahl and Bonin themselves about why their professional partnership has proven so successful over a 26-year span. Here’s what they had to say about one another.

TVNewser: How did you two end up working together?

Stahl: Well, correct me if I’m wrong, but Rich and I, early on in my tenure at 60 Minutes, were due to work together. I was brand new there and I needed someone with a little more seasoning than was on my team at that point, and Rich and I were ready to be teamed up. But at the last minute, Rich, I’m not sure why, but you were snatched from me, and we didn’t get back together again for a couple years.

Bonin: About three years. I was just ending nine years with [the late 60 Minutes correspondent] Mike Wallace, and I was going to swing between Morley Safer and Lesley. And right when I was about to do my first Lesley story, they sent me to [former 60 Minutes correspondent Steve] Kroft for three years. When I had just ended my three years with Steve, I was on an escalator going up at Reagan National Airport, coming back from New York, and you’re at the bottom of the escalator and I heard somebody say my name. It was you, Lesley, and you said, “Will you come work with me?” And I said, “Absolutely.” 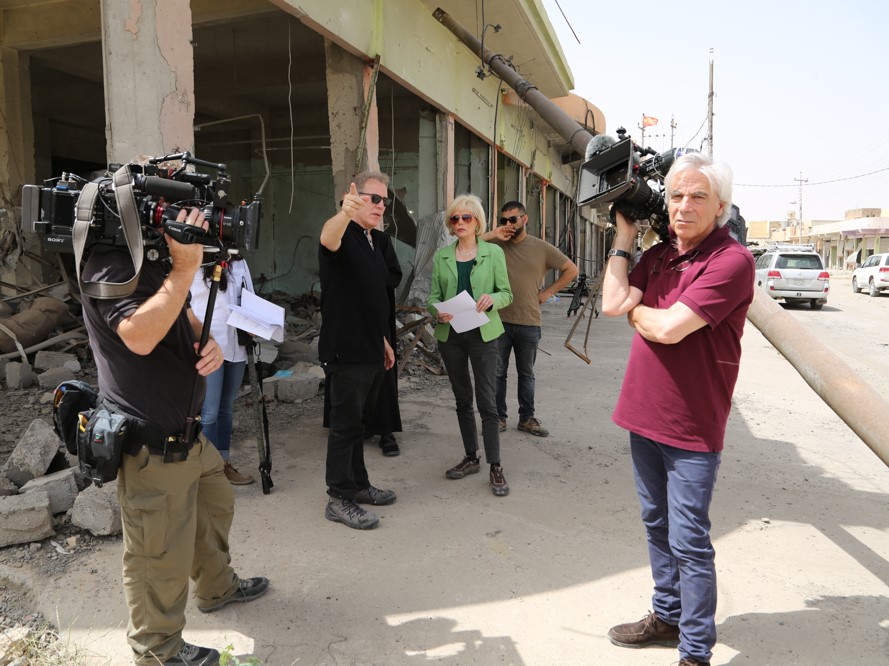 Why do you think your partnership been so successful over all of these years? What’s the secret, or secrets?

Bonin: Arguing. We are “the Bicker-steens” of 60 Minutes.

Stahl: We both answered your question immediately, without hesitating.

Bonin: If we don’t argue, the piece isn’t as good.

Stahl: If we don’t disagree on at least 10 things that are part of the story, it’s not going to come out right.

Bonin: But here’s the guiding principle: Neither one of us cares about being right, we care about what works best and where we both have the ability to recognize in the end what works and what doesn’t work. In the end, whoever is arguing for one thing or the other, we wind up both agreeing what works best and that’s where we end up.

Stahl: That’s for sure. But we also fight in the field.

Stahl: I know you’re going to tell the “oil tank” story because that’s the most classic of our fights. It’s the best example.

Bonin: Our greatest fight that was in front of everybody was when we were in Saudi Arabia. We had amazing access to [Saudi Arabian Oil Company] Saudi Aramco and they were building all of these new oil tanks in their tank farm. I just knew that one was empty –

Stahl: Stop! You have to set the scene. We’re in the middle of the desert, we are in nothing but sand and nothing but heat and steam …

Bonin: … And to get to the tank, you must climb this narrow stairway that must be about equivalent of 10 stories, using ladders. Lesley didn’t want to do it, and we freaked out all these Saudis, we just had a major argument. We argued over the walkie talkies.

Stahl: I said, “We will never use this, it has nothing to do with our story, and who cares?” And Rich kept saying, “trust me, it’s going to be the best shot in the piece.” We just kept going around and around. Meanwhile, while we’re fighting, I’m climbing this stupid ladder.

Bonin: Suffice it to say, that ended up being the most memorable shot in the piece. The next day, our whole team was out at lunch somewhere in Manhattan, and people came up to us and said, “Wow, great piece last night. I loved that shot.”

Outside of your most recent Trump interview, what are some other memorable stories you worked on together?

Bonin: We did a [2016] story in the Arctic about the militarization of the Arctic, and it was just a life experience to be there. It was unbelievably cold, and beautiful. In terms of Lesley, one of the things that jumps out at me was when a U.S. Navy nuclear submarine popped up through the ice, and Secretary of Navy jumped out of the submarine, and we did an interview right in the middle of nowhere in minus 30 degrees Fahrenheit weather. When that was all done, we climbed into the submarine for a spin under the Arctic ice and I’m thinking to myself, “Lesley is a grandmother twice over and look at her, she is one bad ass!” That was an amazing experience.

We also did a [2013] piece in Guantanamo Bay, a two-parter. To me, that sort of encapsulates a lot of things Lesley and I do–a lot of stories and others. It was the big story of the moment, and we got unbelievable access, and really captured the purgatory Guantanamo Bay is, for both the detainees and our soldiers there.

Stahl: One of the marks of an outstanding producer at 60 Minutes is gaining that access. It’s the producer for the most part who talks people who are often reluctant to come on 60 Minutes. Rich is really good at that, and we have gotten so many what we call “gets” because he has won their trust and he’s won their trust because they look at past stories that he’s done and they know he’s a straight shooter. Also, once they agree to an interview, then he is very good at gaining this extra access, and we really did have extraordinary entrée into different parts of Guantanamo Bay. We were on a prison floor by Al Qaeda prisoners. No one had ever done that.

Bonin: It was a spooky scene. They were shaking, rattling their doors in anger. It was spooky, but dramatic and it captured what they all deal with.

Stahl: Also, we sent you pictures of us with [the late Arizona Senator] John McCain and we want to talk to you about that because this was the last interview he gave, and we knew it was going to be the first interview he gave after his diagnosis. There was pathos and drama. We knew that he was having a good time, we knew that we had taken his mind off it for an hour or so. But there was something deeply emotional about this experience; for me anyway. I admired him so much, and he was bearing his soul a little bit, and showing how much he cared about the country and the direction we were going. It was a very special moment I’ll never forget. Once again, it was Rich who gained us special access to this man.

Bonin: I’ll just say two things: One, that story is sort of the glory of 60 Minutes, where you get to meet somebody like him and learn something about your country and your own life. The way he chose to die, which was not by being angry about dying, but about focusing on the extraordinary life he lived, and he chose to do that. You’re sitting there with your headphones on listening to that, and it’s a great insight that you take away from that.

It also speaks to what Lesley does, and what we do. To do this job, you have to be tough. You have to be fast. You also have to have a humanity. When Lesley and I are writing questions together or when she’s doing the interviews, and you got to cover all of that in an interview like that, and you can’t be one note. I think that’s one of the big secrets to Lesley’s success, our success. 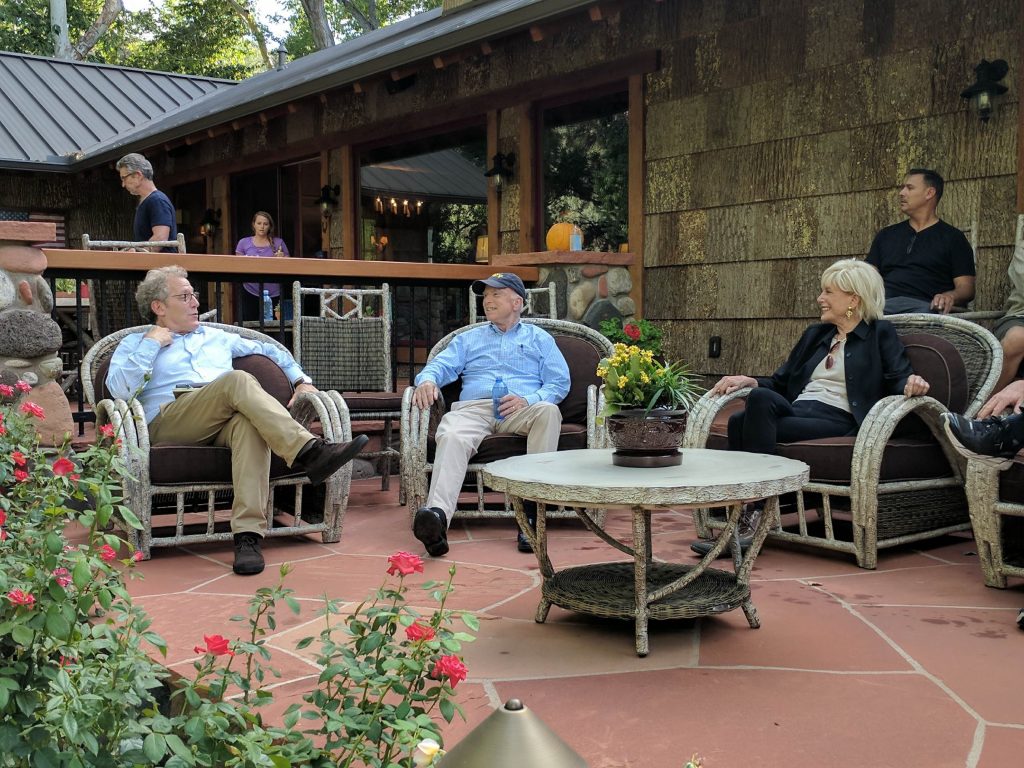 Lastly, because the name of this feature is The Producer I Can’t Live Without, Lesley, what is one of the biggest ways that Rich has saved you during your time working together?

Stahl: Oh, let me count the ways. It’s not a small thing. It’s a huge thing. I make mistakes in some of these interviews, and he is such a good researcher that he doesn’t let me go out on the air and say something that’s not true. That’s really important to me, to keep me honest. He also has fantastic judgment and strong news sense. So, “What’s new here?” He gets that and guides our stories in that direction. He’s a fantastic researcher, he will go out and find investigative aspects of our stories. He is very attracted to those kinds of stories and persuades me to do them, even though sometimes I don’t want to. I honestly believe we have a great collaboration, despite the fact that we do fight a lot. Our stories end up, I think, being successful and I’m almost always 99% proud of the stories we do together.