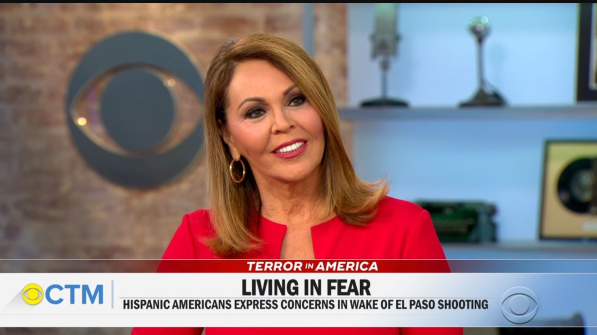 Veteran Spanish-language TV newser María Elena Salinas made her debut on CBS News today, and remarked on CBS This Morning that many Hispanic Americans say they are fearful and anxious in the wake of the terror attack in El Paso this past week, a mass shooting that killed 22 Americans and Mexicans.

“What they are feeling is fear, disbelief and anger. Even though there’s been fear before from being separated from their family, now there’s fear for their lives,” she said. “They want to know why this is happening to them in their community, a welcoming community. A community that lives in harmony with their neighbors south of the border.”

Salinas added that she had spoken with El Paso congresswoman Veronica Escobar, who said she and her constituents don’t feel that this is a matter of partisan politics, but instead a humanitarian matter and that they aren’t being seen as humans.

In addition to co-anchoring Noticiero Univision with Jorge Ramos, Salinas had most recently been co-host of the weekend news magazine Aquí y Ahora.

In 2012, Salinas became the first Latina to receive an Emmy Award for Lifetime Achievement from the National Academy of Television Arts and Sciences. In 2014, she won a Peabody Award and a Walter Cronkite Award for her special about the mass migration of children from Central America to the U.S. In 2017, she was inducted into the NAB Hall of Fame.