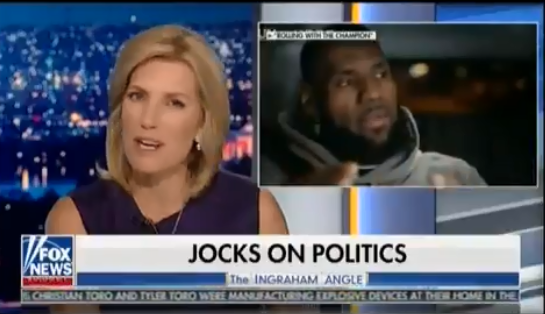 It began when the Cleveland Cavaliers star and Golden State Warriors’ star Kevin Durant took aim at Pres. Trump in a video posted on James’s Uninterrupted platform earlier this week, and Ingraham wasn’t a fan of it.

ESPN host Cari Champion, who led the conversation while driving an Uber (which sponsored the segment), asked how the players would describe “the climate for an athlete with a platform” who wants to “talk about what’s happening in our world.”

“The climate is hot,” James replied. He said that Pres. Trump filling the “No. 1 job in America” — is “someone who doesn’t understand minorities, and really don’t give a f*ck about the people.”

James said that, as a kid, there were three high-profile people from whom he sought inspiration: The greatest athlete, the greatest musician and the president.

The Fox News host told her audience on Thursday night:

Must they run their mouths like that? Unfortunately a lot of kids and some adults take these ignorant comments seriously.

Look, there might be a cautionary lesson in LeBron for kids. This is what happens when you attempt to leave high school a year early to join the NBA. And it’s always unwise to seek political advice from someone who gets paid $100 million a year to bounce a ball…keep the political commentary to themselves because no one voted for you.

Millions elected Trump to be their coach, so keep the political commentary to yourself, or, as someone once said, ‘shut up and dribble.’

James graduated from St.Vincent-St. Mary High School in Ohio on-time in 2003, bypassing college and going straight to the NBA.

Ingraham was criticized by many in the mainstream media the following day for her comments, with some deeming them “racist.”

“I do play basketball, but I am a civilian and I am a citizen of the United States, so my voice is just as loud as hers, I think – or even louder,” said Durant.

Ingraham addressed her original remarks on her program last night:

Ingraham then introduced a series of clips of her criticizing white, progressive celebrities, including Mark Hamill and Jimmy Kimmel, for expressing their political beliefs.

What? I wrote a book, 15 years ago, fairly well known, New York Times best seller called Shut Up and Sing, and I’ve been using that line to call out political celebrities for 15 years without regard to skin color, where you came from, what you do.

James, who appeared at a 2016 presidential campaign event for Hillary Clinton in Ohio, responded to Ingraham’s Friday night comments by posting this photo on social media:

Less than an hour after James’s tweet, Ingraham tweeted that James is invited to appear on her program.

Hey King, Come play on my Court next week. You’re invited on the show anytime. https://t.co/CpXRl5jGzQ

We reached out to the Cleveland Cavaliers for comment regarding Ingraham’s invitation, and they have not immediately responded.

Many athletes have come to James’s defense since Thursday evening, including his former teammate Miami Heat star Dwyane Wade, and NFL players Kyle and Chris Long, of the Chicago Bears, and Philadelphia Eagles, respectively, the latter posting a lengthy Twitter thread criticizing Ingraham, and showing screenshots of celebrities sharing their political insights on Fox News programs over the years.

Ingraham became a full-time host at Fox News in 2017, and hosts the most-watched cable news show in her timeslot.