NEXT:Tuesday, Jan. 5 Scoreboard: CNN Is No. 1 in Demo, MSNBC No. 1 in Total Viewers for Coverage of Georgia Senate Runoffs
PREVIOUS:Q4 '20 Cable News Ratings: CNN Moves to No. 1 in Total Day Among Adults 25-54; Fox News Remains No. 1 in Prime Time 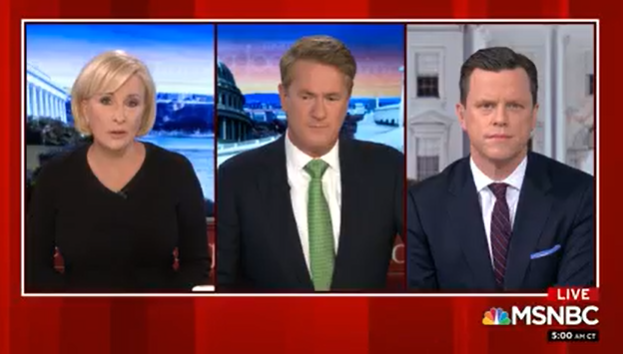 In the opening quarter hour of today’s edition of Morning Joe, the former Republican congressman-turned-morning TV newser accused Capitol Police of opening “the fucking doors” for insurrectionists during Wednesday’s invasion of the U.S. Capitol building.

“You opened the fucking doors…You opened the doors for them and let them breach the people’s house! What is wrong with you?” Scarborough asked, as scenes of yesterday’s riots were shown on screen.

Joe Scarborough to Capitol Police on @Morning_Joe :
“Why are you known as badasses around the Capitol…but then Trump supporters come in and you open the FUCKING DOORS for them.” pic.twitter.com/jnuES5qKao

While the overwhelming majority of Capitol Police were doing the best they possibly could to shut down the mob on Wednesday, there was some footage that went viral of police appearing to open a gate that led to the Capitol building. There was also footage of a cop appearing in a selfie with one of the insurrectionists who had broken into the building.

Some of these people were also seen walking in the Capitol rotunda with officers taking no action to dissuade them from doing so.

This was likely what Scarborough was referring to.

The use of profanity on cable news is rare, but not unprecedented; and it isn’t illegal to swear on live cable TV, though it isn’t exactly promoted either. The FCC does not govern cable, like it does broadcast television.

Scarborough was angry this morning, and he wasn’t afraid to show his anger in the heat of the moment.

The Morning Joe co-host also called for the arrest of these people who stormed the building and accused Pres. Trump, his personal attorney Rudy Giuliani and Donald Trump Jr. of getting the Stop the Steal rallygoers riled up to invade the building. If people — including top politicians — aren’t brought to justice, Scarborough said during the segment, “then we are no longer a nation of laws and we tell people they can do this again.”