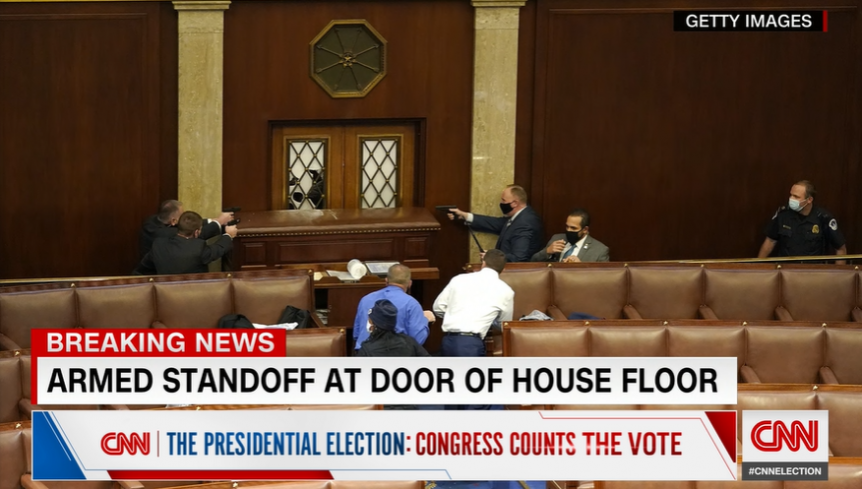 “I certainly feel the loss of words to describe what we’re seeing and how this will resonate.”

That was NBC News’ Lester Holt Wednesday afternoon during a special report covering the crazy scene unfolding in Washington D.C., as scores of Trump supporters attending the Stop the Steal protest rally in the Washington over President Donald Trump’s 2020 presidential election defeat, have moved through barricades and are storming the United States Capitol building, moving through security and breaking into offices.

I repeat: They have stormed the United States Capitol building, moving through security and breaking into offices.

This reportedly happened not long after Trump’s lawyer Rudy Giuliani made a speech to the crowd, during which he told the protestors: “We’re going to walk down to the Capitol and we’re going to cheer on our brave senators and congressmen and women.”

During the same rally, Trump told his supporters, “you’ll never take back our country with weakness. You have to show strength and you have to be strong,” as he also encouraged them to march towards the Capitol.

And march towards the Capitol they certainly did.

BREAKING: Trump supporters have breached the Capitol building, tearing down 4 layers of security fencing and are attempting to occupy the building — fighting federal police who are overrun

This is the craziest thing I’ve ever seen in my life. Thousands, police can’t stop them pic.twitter.com/VVdTUwV5YN

NBC’s Ellison Barber reported during an NBC News special report that some people are getting hurt.

NBC captured the moment when one set of Capitol steps were stormed. @EllisonBarber reported seeing “a massive amount of what appears to be blood on the ground. At least one person here is being taken away on a stretcher.” pic.twitter.com/4qidHddImR

Many have managed to enter the building and are walking around without a whole lot of resistance from law enforcement.

>> @JakeTapper: “President Trump could stop this with ONE TWEET, but instead he’s on Twitter attacking VP Mike Pence for refusing to go along with his attempt at a coup, a bloodless coup. We hope it stays bloodless.” pic.twitter.com/EFvZVuMCj9

“Security at the Capitol has failed during the most important moment of democracy: the certification of the electoral vote for the next president. Protesters are inside the Capitol. No one knows if they have weapons” – @ChadPergram

Trump protesters just discharged a fire extinguisher outside Senate chamber. Many protesters are inside building, and most people are hiding from them pic.twitter.com/0y2sk8LHWd

Questions abound, like are the people who entered the building armed?

Did these people go through the metal detectors or do we have to assume a fair number are carrying in side the capitol right now?

People have made their way onto the Senate floor.

BREAKING: Protesters are on the Senate floor now: pic.twitter.com/k4Q0ln8pZs

Apparently, officers have been hurt:

Shots have been fired:

A woman is in critical condition after being shot in the chest on the Capitol grounds, per @NoahGrayCNN. No other details were provided.

Woman shot in the Capitol has died

Having covered many protests over the years, I do wonder if the majority of these folks were black and brown whether they’d be treated the same way they’re being treated right now.

“This is the nightmare scenario,” Norah O’Donnell remarked during a CBS News special report. “This is reason that ten former Secretaries of Defense, who have served both Republican and Democratic Presidents, unitely under the direction of Dick Cheney, who by many liberals and Democrats is considered a pariah, actually pushed to have them do this to say the military will not get involved, it should not get involved in our electoral process. But this type of antagonizing event brings real nervousness among all the powers of government because of the concern about what it suggests. This is a democracy. Protest is protected and allowed but violence is not. And there are concerns among a number of officials about how these images will be used by our foreign adversaries.”

“This is the nightmare scenario,” @NorahODonnell says. “This type of antagonizing event brings real nervousness among all the powers of government because of the concern about what it suggests. This is a democracy. Protest is protected and allowed, but violence is not.” pic.twitter.com/R5Ld73h1Js