NEXT:Jim Cramer Issues On-Air Apology to Speaker Nancy Pelosi After Calling Her 'Crazy Nancy' During Their Live Interview
PREVIOUS:Fox News Media Is Laying Off Nearly 3% of Its Workforce as Part of a Company Reorg 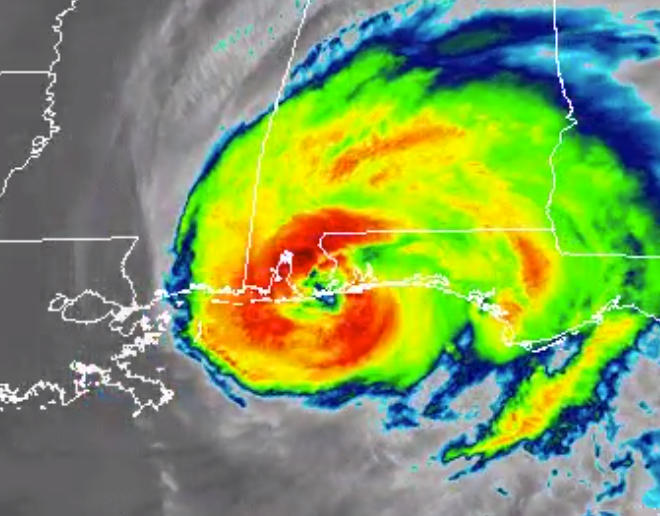 Hurricane Sally officially made landfall at Gulf Shores, Ala., Wednesday at the crack of dawn as a Category 2 hurricane.

#Sally has made landfall near Gulf Shores Alabama at 445 AM CDT as a category 2 hurricane. Maximum sustained winds were 105 mph with a minimum central pressure of 965 mb. More: https://t.co/tW4KeFW0gB pic.twitter.com/zdyilBhdic

Fast forward three-plus hours, and in the 9 a.m. EDT/8 a.m. CDT public advisory, the National Hurricane Center reports that Sally has dropped to a Cat 1, with maximum sustained winds of 90 miles per hour, located about 20 miles north, northeast of Gulf Shores, and 25 miles west of Pensacola, Fla.

ABC chief meteorologist Ginger Zee is reporting from downtown Mobile, Ala., this morning, which was shredded over night from winds, but is seeing less rain now.

Tree damage and awnings ripped in downtown Mobile, Alabama. Thankfully we will see weakening winds from this point. The brunt of the storm happening in the Florida panhandle where the surge has brought 3-4 feet to downtown Pensacola! pic.twitter.com/CC0W1pkojB 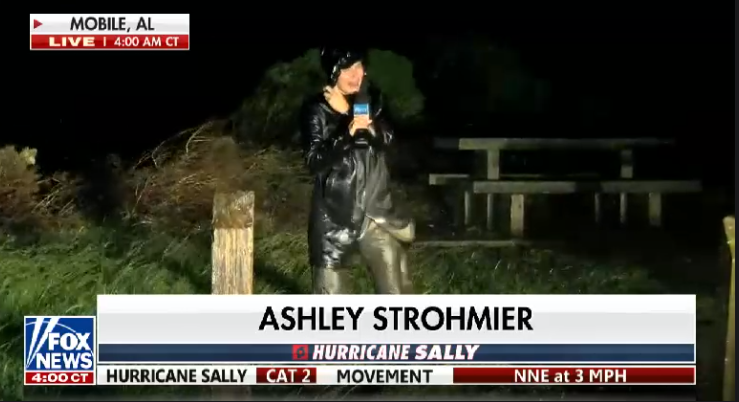 Here’s an absolutely soaked Gary Tuchman reporting for CNN New Day from Pensacola Beach. “It sounds like a war is being fought, the sounds are loud, jarring and frightening,” said Tuchman, adding that he also heard transformers exploding everywhere.

As #HurricaneSally makes landfall, @edlavaCNN reports transformers are blowing up in Mobile, Alabama.

“We saw big flashes of light blue light up the dark sky here… nearly 350,000 people already without power in the initial hours of this storm.” https://t.co/ozTj1OmpwC pic.twitter.com/NeGAkKpgtm

Can you spot @JimCantore in the 5 feet of storm surge?

Dangerous conditions like this continue to be seen as #Sally continues slowly inching northward. pic.twitter.com/6P70Pi88mE

TWC’s Tevin Wooten reporting from Navarre Beach, Fla., on the Panhandle this morning:

That is some seriously heavy rain in @TevinWooten‘s live shot in Navarre Beach, FL. Radar estimates show over 8″ of rain so far and counting #HurricaneSally pic.twitter.com/TelWHhL43X

Good morning. Hurricane Sally has arrived as a strong category two. Winds 110 miles per hour.
CAT 3 would be 111.
The wind is roaring as I take a first look from the balcony of our hotel. pic.twitter.com/78DE7Y7zWi

MSNBC’s Ali Velshi is reporting from Orange Beach, Ala.

#HurricaneSally is the 8th named STORM to make landfall on the Continental U.S. in 2020. This breaks a 104-year old record for storms making landfall before September 16. Prior record was 7 landfalls in 1916.

As Hurricane Sally made landfall on the U.S. Gulf this morning, Teddy—forming in the Atlantic Ocean—has strengthened into a hurricane.

That means there are currently three active storms in the Atlantic with winds of 100 mph or higher: Sally and Teddy, plus Paulette, although she appears to be moving back into the Atlantic.