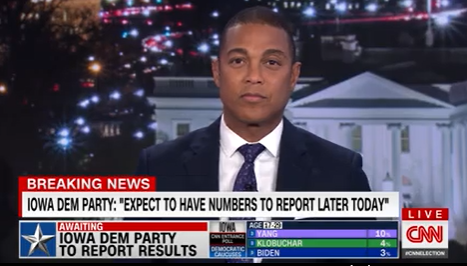 Iowa Democratic caucus-goers came together yesterday evening at roughly 1,700 sites across the state to tally support for their preferred presidential candidates. But after years of preparation, the process was totally thrown into disarray when what the Iowa Democratic Party called “inconsistencies” delayed the reporting of results.

Despite having years to prepare for this night, the Iowa Democratic party struggled with a new counting system, and said that the issue wasn’t caused by “hack or intrusion” of a new app they were using.

Cable news, which had prepared for this event for months and had deployed tons of reporters and anchors to Iowa, was forced to fill a ton of air time.

MSNBC remained live until 2 a.m. ET. Rachel Maddow, Nicolle Wallace and Brian Williams co-hosted the coverage for most of the night, but Chris Hayes was leading when the network closed up shop for the night.

Anderson Cooper, Wolf Blitzer, Jake Tapper, Chris Cuomo, and Don Lemon led live coverage for CNN at various points throughout the evening. The hosts were joined by a rotating group of panelists.

Fox News extended their special coverage with co-anchors Bret Baier and Martha MacCallum until 12:30 a.m. ET. Shannon Bream took over at that time and presented live coverage until 2 a.m. ET.

The campaigns were (and still are) totally freaked out by what has happened, and understandably so. Some candidates gave versions of stump or victory speeches on Monday before calling it a night. The counsel for the Joe Biden campaign went as so far as to send a letter to the chair of Iowa’s Democratic Party, demanding an explanation for the delayed results.

The Pete Buttigieg campaign was slammed by many for declaring victory before votes had even been counted. However, Fox News Sunday anchor Chris Wallace said the Amy Klobuchar and Buttigieg campaigns were smart to put out their own narratives:

“Well, I think it’s really interesting and pretty smart of the Buttigieg campaign and the Klobuchar campaign—we heard from our reporters in both of those—to put out their own story. If they’re not going to get a surge or spin or any boost from actual results, they’re going to say, ‘Well, we did really well in our precincts and we’re seeing tremendous enthusiasm.’ And we’re now seeing from our colleague Ellison Barber that Amy Klobuchar is going to speak within ten minutes, which I think is pretty smart on her part because the viewership on the east coast and now in the Midwest is beginning to go away as people decide, you know, I think I’ll go to bed and read about it in the morning. So why not get out there and declare victory and you know, when the results come out tomorrow you can deal with them then? But it seems to me waiting around for this to get solved—I will say one other thing because all of you and a number of people especially Brit make fun of me because they say I’m a luddite, I’m a Neanderthal when it comes to technology. And I will tell you this pad and this pen are looking pretty good right now.”