NEXT:If She Had Entered, Megyn Kelly Would Have Won the 2018 TVNewser Bracket Challenge
PREVIOUS:Scoreboard: Tuesday, April 3 As we shared with you yesterday, all three cable news networks saw very strong first quarters in the ratings, with Fox News and MSNBC the No. 1 and No. 2 channels on all of cable.

But it was CNN that came out on top in terms of top brand ad revenue for one category in particular: pharmaceuticals.

According to data from Alphonso, a research firm that tracks TV audience to help brands better target their customers, CNN had 6,487 EQ units of commercial time among its top pharmaceutical brand advertisers, bringing in a spend of $19.9 million; Fox News had 5,279 EQ units among its top 10 brands for a $16.2 million spend; and MSNBC had 4,737 EQ units for a spend of $8.1 million.

As we showed you last month, there is a good amount of cross-over among brands advertising on all cable channels. There were a few exceptions during Q1 2018. T-Mobile (in red) is the only national brand appearing as a top spender on CNN. My Pillow (in blue) concentrated approximately 87 percent of ad weight on Fox News, versus CNN or MSNBC. Similarly, Jenny Craig (in blue) concentrated 73 percent of its cable news spend on Fox News versus the remainder on CNN. 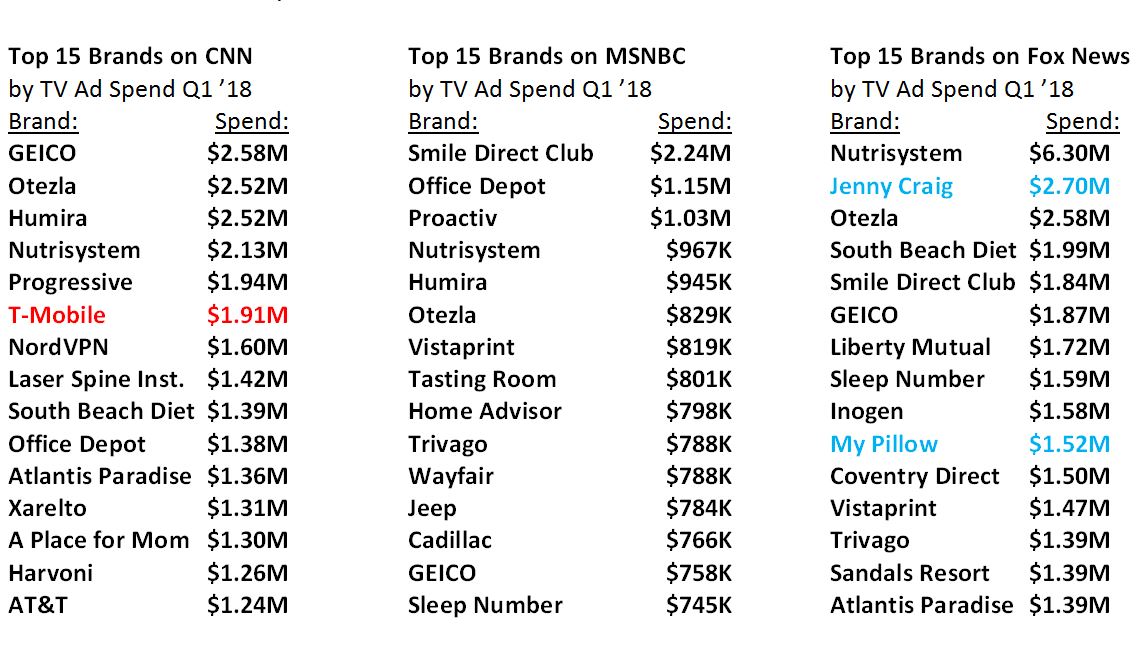 “Ever shifting social issues and consumer tastes make advertising on cable news a challenging proposition,” said TS Kelly, SVP of Research at Alphonso. “In light of recent controversies, marketers are likely more sensitive than ever to ensure their brands are aired in safe and relevant TV environments.”

Kelly is referring to the recent brand boycott of Laura Ingraham‘s show. Jenny Craig was among one of the brands that pulled advertisements.