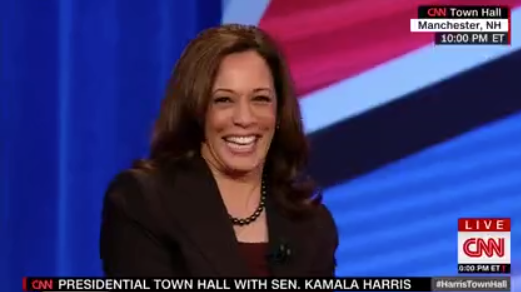 CNN produced an impressive quintet of its signature live town hall events last night from New Hampshire, and they performed relatively well in the network’s target demographic of adults 25-54.

However, they struggled in total viewership, according to early data from Nielsen.

Sen. Amy Klobuchar kicked things off last night at 7 p.m. Her CNN town hall failed to gain much traction in the ratings, and CNN finished No. 3 in the hour across the board.

CNN adroitly slotted the higher-profile candidates in prime time. Sen. Elizabeth Warren was featured in the 8 p.m. hour. She did a solid job of building on her 7 p.m. lead in, but it wasn’t enough to overcome the buzzsaw that is Tucker Carlson‘s 8 p.m. Fox News program.

As you’ll see below, Carlson’s margin of victory in the 8 p.m. hour is the reason Fox News defeated the CNN Town Hall series and MSNBC last night in the prime time daypart.

Sen. Bernie Sanders was slotted in CNN’s top-rated 9 p.m. hour, and gave CNN a win in the demo.

The Sanders’ CNN town hall failed to deliver as many total and demo viewers as his Fox News town hall last week.

Sen. Kamala Harris took the stage in the 10 p.m. hour, drew the most viewers of any CNN town hall last night, and gave CNN a demo win at 10 p.m.

Sen. Harris and CNN seem to click. Her Jan. 28 CNN town hall was the top-rated one of the year to-date among adults 25-54. She was slotted into the 10 p.m. hour last night, and her’s ended up being the top-rated town hall of the night.

Sen. Harris also had easier programming competition than Warren and Sanders. Lawrence O’Donnell doesn’t haul in the number of viewers that Rachel Maddow does, and many of O’Donnell’s younger viewers may have switched over from O’Donnell to CNN for the town hall. Over on Fox News, Jason Chaffetz filled in for Laura Ingraham on The Ingraham Angle. It’s uncertain how many of Ingraham’s regular viewers tuned out when they saw Chaffetz in the chair, and went on to change the channel from Fox News over to Sen. Harris on CNN.

Despite Harris’ strong ratings relative to the previous hours, The Ingraham Angle was still the most-watched cable news show in the 10 p.m. hour, and CNN finished No. 3 in total viewers.

Lastly, there was Mayor Pete Buttigieg slotted in the 11 p.m. hour.