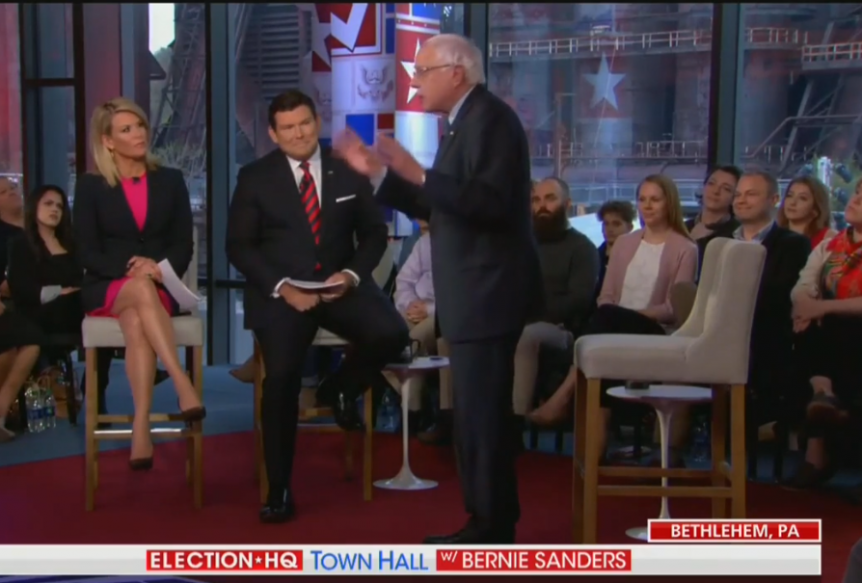 Overall, the event delivery was +24% in total viewers and +40% in the demo compared to the network’s 2019 average in the hour.

The presence of Bernie Sanders gave Fox News a record audience. 2019 in a nutshell.

Even the president watched the Sanders Town Hall. He didn’t seem thrilled that Sanders was getting air time on a network he seemed to refer to as “we.”

So weird to watch Crazy Bernie on @FoxNews. Not surprisingly, @BretBaier and the “audience” was so smiley and nice. Very strange, and now we have @donnabrazile?

Baier came across as unfazed:

Thanks for watching Mr. President – we’d love to have you on a town hall soon — or even an interview on @SpecialReport —it’s been awhile. We cover all sides. https://t.co/1EDeWFhNe7

As significant as the Fox News Sanders Town Hall was, both from an ideological standpoint and from a pure numbers standpoint, it wasn’t the top televised town hall of the season across the board. The Jan. 28 CNN Town Hall featuring Kamala Harris delivered 708,000 Adults 25-54 from 10 – 11 p.m. That’s more than the 489,000 demo viewers who watched the Sanders Town Hall.

The Harris Town Hall, which aired in prime time, delivered 1.95 million total viewers, down from the Sanders’ 2.55 million, an event which did not air in prime time.

The event had its moments of combativeness. Sen. Sanders called out FNC on many occasions for what he deemed as biased coverage. In one instance, he said, “your network doesn’t have a great deal of respect in my world.” On another occasion, he also told Baier and MacCallum that they should be asking President Trump about his tax returns, and not just him.

Regarding his criticism of the network, Baier at one point told Sen. Sanders to knock if off, and Sanders did indeed seem to tone it down a bit. Overall, it seemed like a relatively cordial back and forth between Sanders and the duo of Baier/MacCallum.

This might not be the final Fox News Town Hall in advance of 2020, much to the chagrin of the DNC. There are rumors that Fox News may host a town hall for rising Democratic party candidate for president Pete Buttigieg.

“Mayor Pete” has been on a media tear recently, and has previously appeared on Fox News Sunday with Chris Wallace.

If Fox hosts Buttigieg, DNC chairman Tom Perez may have a problem on his hands. Despite complimenting the network’s news operation, he has vowed not to partner with Fox News on Democratic primary debates. Does this ban extend to Democratic party town halls? Will Perez’s stance change? We asked Fox News if they would host a town hall featuring Buttigieg, and they didn’t respond to our request.