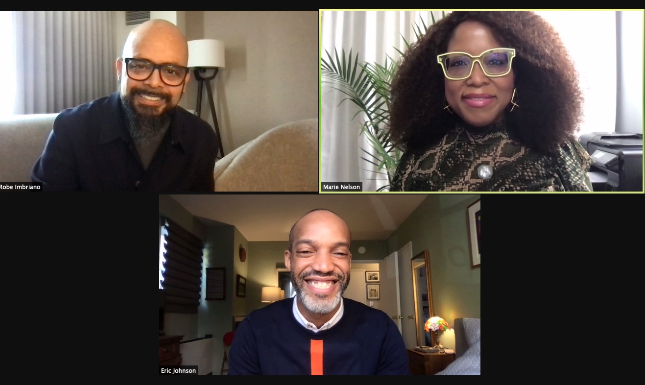 Disney kicked off the second day of its Television Critics Association’s virtual winter press tour presentation with a panel featuring the new ABC News prime-time newsmagazine, Soul of a Nation.

The weekly, six-episode series will launch this coming Tuesday, March 2 at 10 p.m. ET/9 p.m. CT on ABC. It presents viewers with a window into realities of Black life in America, and dives deeper into what’s an important moment of racial reckoning.

Series creator, ABC News svp of integrated content strategy (and potentially the next news division president) Marie Nelson led the TCA press tour presentation, and she was joined on the virtual stage by Soul of a Nation co-executive producers Eric Johnson and Robe Imbriano.

“Eric and Robe are the first black men to co-ep a prime time newsmagazine at ABC News,” said Nelson. “We are history-makers and it’s an incredible feeling.”

Each episode of Soul of a Nation will explore a specific theme, including Black spirituality, Black joy, activism in sports and the racial reckoning that erupted after George Floyd’s death.

This Is Us star Sterling K. Brown will be the special guest host for Tuesday’s premiere, which also features ABC News chief justice correspondent Pierre Thomas speaking in a one-on-one interview with U.S. Capitol Police officer Harry Dunn, the first and, to date, only U.S. Capitol Police Officer to speak out post-Jan. 6 insurrection. Dunn, who was quoted numerous times during the impeachment trial, details the fury and horror of the Capitol insurrection, and speaks about the role race played and discusses race and policing nationally in this time of Black Lives Matter.

Also in the premiere, Nightline co-anchor Byron Pitts travels to Evanston, Ill., the first locality in the country to fund a plan to distribute reparations to its Black residents. The story reveals how the city arrived at this historic point and how they are changing the national dialogue on reparations. Pitts interviews actor and reparations activist Danny Glover and speaks with community leaders, historians and multi-generational family members who, in some cases, lived through the insidious racism and redlining in this now-liberal Chicago suburb.

The View co-host Sunny Hostin will moderate a recurring conversation called In the Kitchen, where each week a group of talkers and thinkers join her for a candid discussion on current events and the theme of the week. This episode features Brown and Angela Rye.

Each episode will end with a musical performance. John Legend will be featured at the conclusion of Tuesday’s premiere.

While Soul of a Nation consists of Black stories being told by Black people, the series creators hope and believe the stories can resonate with everyone.

“It was very important for us as we were putting these ideas together — I want my mother to see herself in the content that we’re doing. I want my little brother to see himself in the content that we’re creating. My grandmother. My aunties. I want them to see themselves reflected in what we’re doing,” said Johnson. “But we also want everyone to know that they can find themselves too in Black storytelling. Black stories are not just for Black people. We want everyone who watches this to take something away and feel like they can relate to a reparations story. Or that they can relate when we go back to Tulsa, which is essentially an incredibly long, true crime story. We want people to be able to connect to that. Yes, we hope that Black people tune in in big numbers, but we hope that these stories resonate with everyone, honestly.”

Imbriano added: “These are profoundly American stories, before anything else. We are telling these stories that are Black stories, but for all people.”

And understanding this is a prime time newsmagazine, Nelson says the production team will have the flexibility to crash a major news story for the show as needed.

“Yes, if we had to tear up the show, we absolutely would,” said Nelson, eliciting visible grimaces from Johnson and Imbriano. “If that’s what’s going on in the country, and it’s speaking to this audience in a way that we want to be completely connected and engaged to them.”

Nelson said that the broadcast has already demonstrated the ability to do that. “You will see that ability in the premiere, with [ABC News chief justice correspondent] Pierre’s [Thomas] interview with [U.S. Capitol police] officer [Harry] Dunn. That was an interview that the news division had been pursuing for last couple of months, and we weren’t clear when that would possibly get it. Having to turn on a dime, having to change our production plans to accommodate, and to make sure we’re telling the right stories in this moment, we will absolutely do it.”

Johnson added: “We are news. We are prime time. If something happens, we will respond to it.”