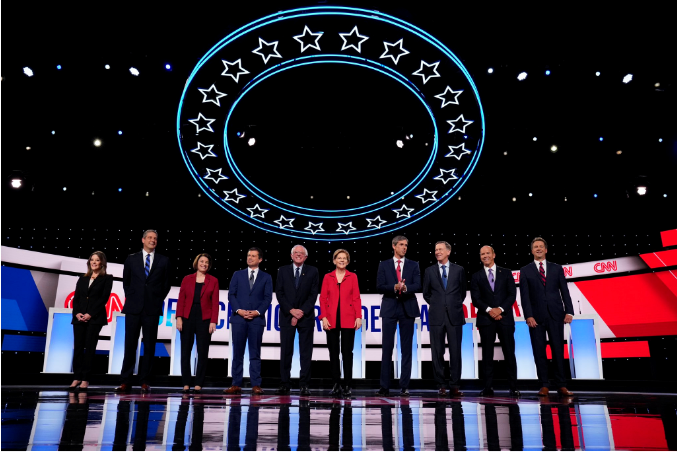 The numbers are in for last night’s CNN Democratic primary debate, and they’re not half bad.

According to the Nielsen fast national data, 8.69 million total viewers tuned into night No. 1 of the two-night debate across CNN TV (U.S.) and CNN en Español. 2.53 million of those viewers were adults 25-54.

CNN digital’s live stream of last night’s debate saw 2.8 million live starts on CNN’s owned platforms (CNN.com, Edition.CNN.com, CNNgo OTT apps and mobile apps for iOS and Android), and viewers spent an average of 75 minutes watching the night digitally, placing it among the top debates ever for watch time. According to CNN, that translates into a TV equivalent of 516,000.

How do last night’s debate ratings stack up? The first two-night Democratic primary debate of the 2020 cycle was hosted by NBC last month, and night No. 1 delivered 15.3 million total TV viewers watching across three NBCU networks: NBC, MSNBC and Telemundo.

Yes, 8.7 million isn’t anywhere close to 15.3 million. However, the fact that CNN is approaching the same total number of viewers as a broadcast network like NBC is really nothing to scoff at. We’re also in the last week of July, not exactly a time where folks traditionally flock to their television sets.

Fox News had the first Republican primary debate of the 2016 election cycle, airing on Aug. 6, 2015. It delivered a whopping 24 million total viewers, making it the most-watched non-sports basic cable telecast since Nielsen started measuring audiences in the mid-’80s. The inclusion of then-celebrity businessman Donald Trump, and the fact the debate only featured the top 10 Republican candidates most certainly played a huge role in these gaudy numbers.

What can we expect from tonight’s debate, ratings-wise?

Numbers probably won’t approach NBC debate night No. 2 level, but they may follow a similar trend in that there may be audience growth. The second night of the NBC debate set a Democratic primary-record with 18.1 million viewers vs. the previous night’s 15.3 million. It’s very possible that this trend remains intact, especially considering the former vice president and the high-profile California senator are among tonight’s participants.