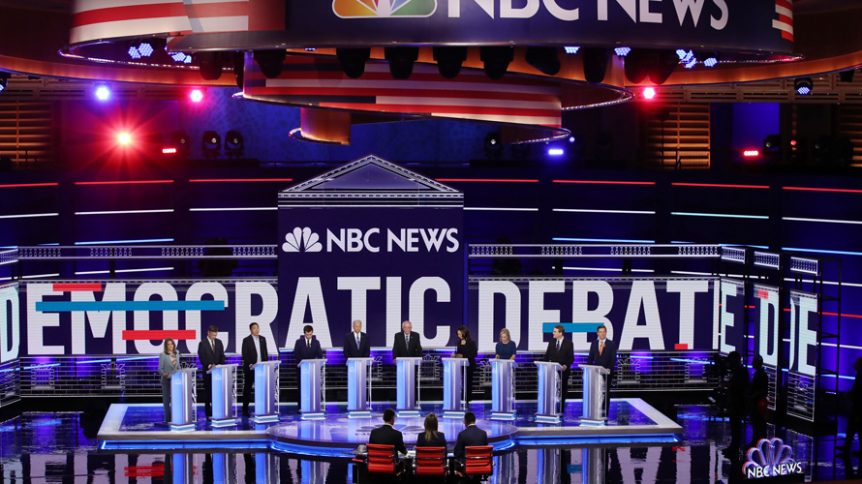 The viewership numbers for Democratic primary debate night No. 2 are in, and they’re record-breaking.

When it came to younger news viewers, out of the 18.1 million total, 5.3 million hailed from the Adults 25-54 demo–the demo TV news advertisers covet–and 4.4 million million were adults 18-49.

When it came to 2016 election cycle, the first Republican primary debate aired on Fox News Aug. 6, 2015, and delivered a whopping 24 million total viewers, making it the most-watched non-sports basic cable telecast since Nielsen started measuring audiences in the mid-1980s. The inclusion of then-celebrity businessman Donald Trump and the fact the debate only featured the top 10 candidates surely played a role in these huge numbers.

The 2016 campaign was most certainly an outlier relative to past cycles.

The 2012 debates featured only Republicans, as then-President Barack Obama was still in office and not being primaried by his fellow Democrats. The first Republican primary debate took place on May 5, 2011 and aired on Fox News. It delivered 3,528,000 viewers.

The most-watched primary debate of the 2012 season aired on ABC in December of 2011. That one delivered 7.6 million total viewers.

The most-watched primary debate in the 2008 cycle aired on ABC and attracted 10.7 million viewers. It also took place in April of the actual election year, when interest is traditionally higher, particularly among casual news consumers.

Here’s how many Total Viewers watched the debates on the linear TV networks:

Here’s how many Adults 25-54 watched the debates on the linear TV networks:

Lastly, here’s how many Adults 18-49 watched the debates on linear: