NEXT:'The View' Is Inducted Into the Broadcasting & Cable Hall of Fame
PREVIOUS:CBS News's Holly Williams Is in Raqqa As Syrian Forces Celebrate Win Over ISIS 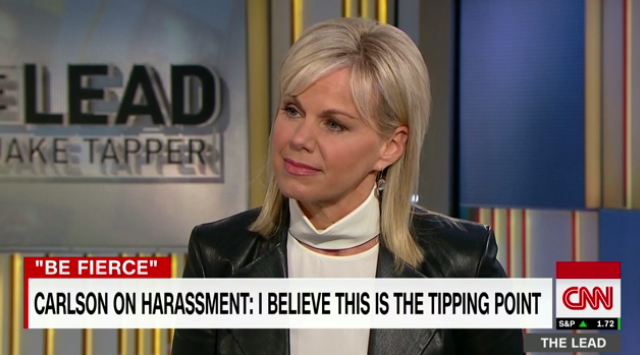 Former Fox News anchor Gretchen Carlson sat down with CNN’s Jake Tapper yesterday as part of a media tour to promote her new book, Be Fierce: Stop Harassment and Take Your Power Back.

The conversation quickly turned to the Harvey Weinstein scandal. Tapper credited Carlson as a woman who has paved the way for other women to come forward with their own harassment stories, and he once again called out what he feels is hypocrisy in the media about how journalists and talking heads cover stories of sexual harassment.

To prove his point, he proceeded to play clips of Fox News hosts talking about the Weinstein scandal.

Tapper asked the former Fox Newser to comment on the “righteousness” from those working at “places” in which harassment is seemingly part of the culture. He used the term “places” knowing that Carlson was not allowed to specifically name her former employer.

She also wondered aloud why nothing was mentioned about “a story that had taken as much attention just 15 months before,” (presumbly her’s). That said, she declined to name specific names. She also declined to name names when she sat down with us last month.

Later in the interview, Carlson praised Tapper for reaching out to her “during my darkest days to say I was a role model for your children.” Tapper is mentioned in Be Fierce.

Carlson left Fox News when her contract was not renewed in June 2016. Less than two weeks later, she filed a sexual harassment lawsuit against the late co-founder and chairman of Fox News, Roger Ailes. Carlson would go on receive a settlement of $20 million and an apology from 21st Century Fox. The lawsuit against Ailes eventually forced his departure from the network.

Carlson’s departure from Fox News in June 2016 set off a chain reaction that stunned America’s No. 1 basic cable network, including the departure of its former star on-air personality Bill O’Reilly this past April.