NEXT:Jeff Glor Has Been Named CBS This Morning: Saturday Co-host and CBS News Special Correspondent
PREVIOUS:The New York Times Is Reportedly Asking Its Reporters Not to Appear on The Rachel Maddow Show 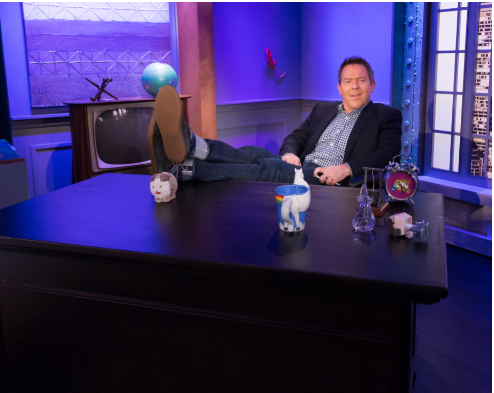 Politics has consistently been discussed on late night television, going back to when Johnny Carson starred as host of The Tonight Show. But the genre has taken on an even more political tone in recent years, with hosts making President Trump a consistent focus of their nightly monologues.

Hosts used to poke fun at the president, but these days, the rhetorical poke has transformed into a punch. The majority of late night comedians don’t like Trump and aren’t afraid to make that known.

Then there’s Greg Gutfeld, Fox News’ resident political comic and a co-host of The Five, who takes a different approach to late-night political comedy with his Saturday night Fox News show, The Greg Gutfield Show. And he’s found quite a following: in May, The Greg Gutfeld Show averaged more total viewers (Nielsen live-plus-same-day) than ABC’s Jimmy Kimmel Live!—1.82 million to 1.70 million—though Kimmel aired nearly four times as many episodes in that timeframe.

We caught up with the veteran Fox Newser to get his thoughts on political comedy in the era of Trump and how he stands out from the rest.

TVNewser: What’s the biggest difference in your news/comedy delivery and material when Obama was president compared with Trump as president?

Gutfeld: It’s a contrast. Obama was boring during bad times. We had ISIS, North Korea, recessions and economic meltdowns. It was a dark period of life, and I say that, having gone through the Carter administration.

But Obama’s bland personality projected smooth sailing through rough seas. Today, it’s the opposite: the world is phenomenally better. ISIS is decimated, North Korea has ratcheted down its belligerence, our economy speaks for itself, our military footprint is shrinking … but Trump, who has presided over a lot of this, is the “volatility replacement.” Before: Obama placid, world unpredictable. After: Trump unpredictable, world placid.

So Trump is so much more fun to cover and you can cover him a lot because most of the world’s ducks are in a row. There’s never been a president quite like this, and the relatively peaceful, prosperous time allows you to indulge it, capture it, talk about it. Who knows, it could all change. But for now, a nonpolitical beast is unraveling politics before our eyes. Mind you, if you focus on the psychological ramifications of Trump, then you will disagree. Meaning, the complaints of stress and anxiety. But the concrete evidence of the world changing for the better should give you some relief.

What do you think of Congress?

Their preoccupation with Trump is a full-time job, which exposes the previously untold truth: much of what they do is not necessary, if they can spend all their time on him. Trump is used to competing in the game of business, but politics is a playing field where the goal is to prevent the game from even starting. Ever. That’s a good thing and a bad thing. Or just a thing.

Who provides better material: Trump or Pelosi, and why?

Trump. I’ve said it before. He’s a potato, a food stuff that you can turn into a dozen different meals.  A potato can be made into anything: potato skins, potato salad, french fries, scalloped potatoes, gnocchi. He’s a network producer’s dream. You can create a meal out of Trump every day, and it’s still delicious. I could do a daily show just about Trump, with six different courses every day, that are always different. We almost do! You can’t say that about Pelosi, or anyone for that matter. Trump is a potato. Pelosi is a kumquat.

Has the news/entertainment line been completely blurred and is there any going back?

That’s not the line that’s been blurred. The line blurred is between [other] media [outlets] and the Democrats. They both share the same goal, which is to create conflict and division that simultaneously raises ratings on CNN and MSNBC, while upsetting voters, which helps the Dems. So their goals overlap perfectly, which is why CNN is reduced to being a mouthpiece for constipated anti-Trumpers riddled with persistent, emotional traumas stemming from 2016.  Look: The Democrats are okay people, they’re just doing their team sport thing. Their job is to rally against Republicans, and when you’re on the outside of the White House, looking in, that’s all you can do! So I sympathize.

The media is a different story. They hate everyone who counters their assumptions. So it’s a lie that this polarization is Republican vs. Democrat. The real polarization is the media vs. everyone else.  The media, every day, is trying to divide us, because conflict sells.

Your ratings at 10 p.m. are really good. Have you considered talking to the powers that be about an 11:35 p.m. special? Going up against the late-night hosts could be interesting.

First off, it wouldn’t be a fair fight. My staff consists of nine people. When you see our skits, you see my staff. They aren’t actors or writers or performers. They are assistants, producers, bookers. But they do everything. They act in our skits, when they aren’t booking cars, or greeting audiences or writing copy. Meaning, here is a small fist kicking the crap out of shows that have an army of overpaid, Harvard-educated hacks. The late-night shows have “writers rooms” where they spend all day coming up with jokes.

We don’t have that. I sit in my office and shout out sentences to the group, and they answer. So I will say, “Stormy Daniels’ money disappeared faster than….” and maybe Todd yells, “a Hostess Twinkie on Michael Moore’s lap.” Only funnier. We do everything for the show, together. The fingerprints of the entire staff are all over it.  That’s not the case with these well known, overly-promoted gassy shows—and you know why? Because they need a big staff to balance out their mediocrity. Why do they have a dozen writers? Because 10 of them suck.  Where I work, every person there pulls their own weight and more. And they make me look smarter than I actually am. Which is easy. We are beating other bigger staffs with better material, smarter guests, cleverer concepts, despite being outgunned by a mile.

Do you ever worry about losing advertisers, as some of your colleagues have, over what you say?

So what’s that worry generated from? It’s when a small group of hardcore activists frighten advertisers by tricking them into thinking four people on Twitter are 40,000 and therefore present an illusory threat to their bottom line. The pitchforks weren’t buying your cars before, and they won’t buy them now.

Freedom of speech is under threat by activists groups who see how skittish corporations are.  And viewers need to fight back.  My advice to viewers: if companies are scared of left wing groups who don’t even buy their products, then they should be scared of you too.  Find out which companies turn tail, and let them know that you’re boycotting them. Because we are living in a time when a small faction is trying to control your life, saying what you can watch and what you can’t. It’s time to turn the tables.