NEXT:CNN to End HLN Live Programming, Including Morning Express with Robin Meade
PREVIOUS:Al Roker Is Back in the Hospital 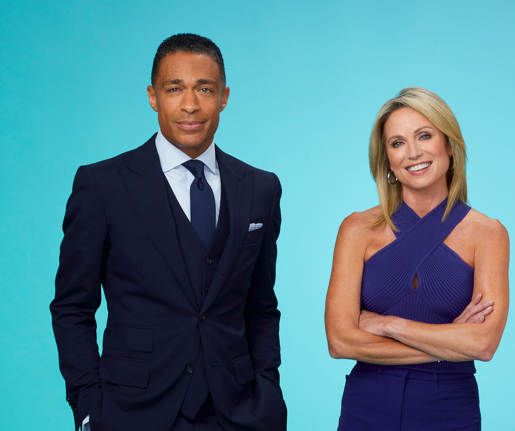 GMA3: What You Need to Know co-hosts Amy Robach and T.J. Holmes appeared on the ABC midday news program together Thursday for the first time since The Daily Mail reported the two anchors have engaged an off-camera romance.

The duo did not address the report on the Thursday broadcast. Holmes asked in the open, “Who’s looking forward to the weekend?” a line which caused hands to raise, and a tired-sounding Holmes to add, “Of course we are!” Then, they moved on.

Included in the online piece are a series of pictures showing the duo together at a Times Square bar, spending alone time in each other’s apartments, and – two weeks before Thanksgiving – a weekend away in a secluded cottage in Upstate New York. Their dynamic reportedly turned from friendly to romantic in June when the duo were in London covering the Queen’s Jubilee for GMA.

Robach and Holmes separated from their respective spouses in August, the tabloid news site reports.

Robach, a GMA and 20/20 co-anchor who joined ABC in 2012, and Holmes, who joined ABC as a correspondent and anchor in 2014, currently share the spotlight on Good Morning America’s third hour, GMA3: What You Need to Know. GMA3 launched in March 2020 as an additional hour of news midday, which aimed to help daytime audiences navigate the outbreak of Covid-19. This came at a time when many Americans were confused and searching for answers. In-depth coverage of the pandemic, led by Robach and ABC’s lead medical correspondent Dr. Jennifer Ashton, had been the primary focus of the GMA third hour from its 2020 launch through the summer of that year. However, Holmes joined the hour in the fall of 2020, the show evolved to include coverage of America’s racial reckoning, as well as coverage of the 2020 presidential election. Today, the show closely resembles the two-hour flagship program – a daily mix of hard and soft news.