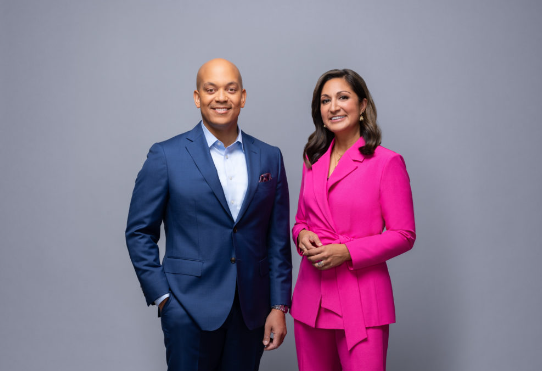 PBS announced Wednesday that Geoff Bennett and Amna Nawaz will be the new co-anchors of PBS NewsHour.

Bennett and Nawaz will begin their new assignment on Monday, January 2, 2023, taking over from longtime anchor Judy Woodruff, who announced last week that she would be stepping down from that role at the end of the year.

Bennett joined PBS from NBC in January of this year as the NewsHour’s chief Washington correspondent and was also the anchor of the weekend editions of PBS NewsHour.

Nawaz has been with PBS since 2018 and has served as PBS Newshour’s chief correspondent as well as its primary substitute anchor.

In making the announcement Sharon Rockefeller, president, and CEO of WETA and president of NewsHour Productions, said, “PBS NewsHour continues to be dedicated to excellence in journalism. Amna and Geoff bring to their new positions three essential qualities for the role – accomplished careers in substantive reporting, dedication to the purpose of journalism to illuminate and inform, and a deep respect for our audiences and the mission of public media.”

Bennett said, “I’m proud to work with such a stellar group of journalists in pursuit of a shared mission — providing reliable reporting, solid storytelling, and sharp analysis of the most important issues of the day. It’s why PBS NewsHour is one of television’s most trusted and respected news programs and why I’m honored and excited to partner with Amna in building on its rich legacy.”

Nawaz added, “It’s never been more important for people to have access to news and information they trust, and the entire NewsHour team strives relentlessly towards that goal every day. I am honored to be part of this mission, to work with colleagues I admire and adore, and to take on this new role alongside Geoff as we help write the next chapter in NewsHour’s story. Today is a day I never could’ve imagined when I began my journalism career years ago, or while growing up as a first-generation Muslim, Pakistani-American. I’m grateful, humbled, and excited for what’s ahead.”

Bennett and Nawaz have huge shoes to fill in replacing Woodruff, a trailblazer in the TV news business. She recently spoke to our A.J. Katz , where she revealed why now was a good time to step down from anchoring PBS Newshour, saying she wanted to ensure she still had the energy to do other projects.

“What I would love to do is understand where Americans are right now as we head into this next consequential presidential election. Every one of them is consequential, it seems to me this one particularly so because of the political turmoil and political divisions we’ve been experiencing the last several years,” Woodruff said.

She added, “I just relish the opportunity to talk to people in the middle of the country and all across the country, but also to talk to experts, people who’ve thought a lot about this, written about it, including economists. I would love to talk to faith leaders, people who have looked at education, “how does education play into this?” There’s there’s so many strands of it – young people, older people. It’s a great, big country, and a lot of questions. Anything I can do to help people think about this, I would love to do.”