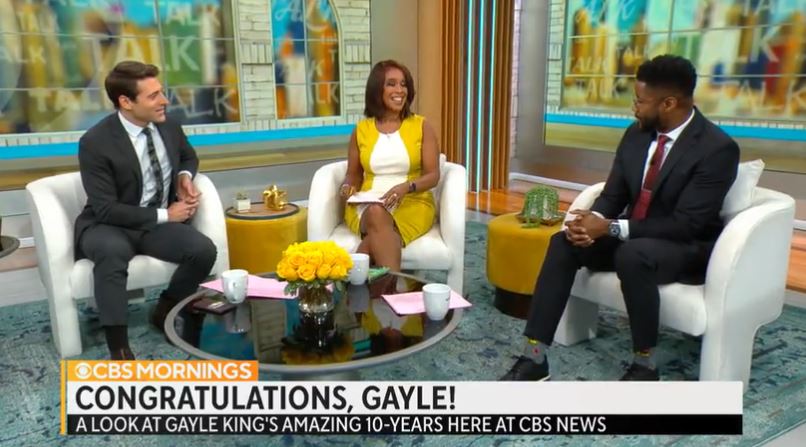 CBS News has experienced a number of changes since 2012, including countless host and anchor swaps and a total rebrand of its morning show in fall of 2020. But there has been one constant over the past decade: Gayle King.

The longtime CBS newser celebrated her 10th anniversary with CBS News on Monday morning—and will also mark the occasion tonight as a guest on CBS’ The Late Show with Stephen Colbert.

King celebrated the milestone with CBS Mornings co-hosts Tony Dokoupil and Nate Burleson today, as the broadcast took a look back on her 10 years at the network. King also wore her favorite yellow dress today, the same one she wore on her first day and has worn on every anniversary since.

Every year, she wears the same iconic yellow dress she wore on her first day to mark the occasion 💛 pic.twitter.com/OVS9Egwugn

Ten years at the same network and on the same show is a notable feat. However, contract renewal talks for King and Norah O’Donnell are taking place this year and it’s possible King won’t be wearing the yellow dress on CBS next year. She has a home in Los Angeles and it has been reported that she would prefer to be closer to family who live out there. Would CBS be willing to give her an LA-based show? Will she stay the course and remain in New York, or will she walk? King’s status is something we’ll be keeping an eye on throughout 2022.

We’re taking a look back at her amazing time here at @CBSNews so far — and looking forward to much more to come. pic.twitter.com/iYkODG5Dyp