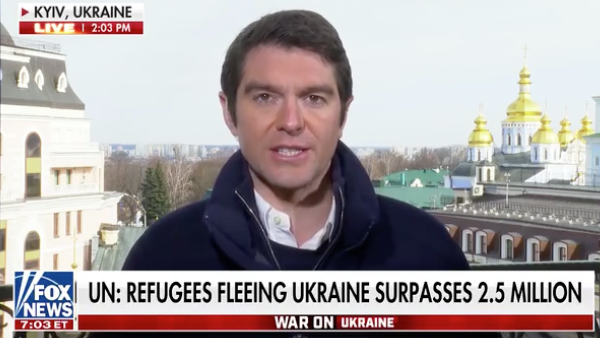 Earlier today, our correspondent Benjamin Hall was injured while newsgathering outside of Kyiv in Ukraine. We have a minimal level of details right now, but Ben is hospitalized and our teams on the ground are working to gather additional information as the situation quickly unfolds.

The safety of our entire team of journalists in Ukraine and the surrounding regions is our top priority and of the utmost importance. This is a stark reminder for all journalists who are putting their lives on the line every day to deliver the news from a war zone.

We will update everyone as we know more. Please keep Ben and his family in your prayers.

Prior to that, since joining the network in 2015, Hall served as FNC’s foreign affairs correspondent based in London, where he covered international news for the network. Throughout his tenure with the network, he has covered several international breaking news events, including terror attacks in Paris, Brussels, Munich and Istanbul, the death of Washington Post journalist Jamal Khashoggi and the summit in Singapore between then-President Trump and North Korean leader Kim Jong-Un.

Earlier: A Fox News journalist has been “injured” while working outside of Kyiv as part of the network’s coverage of Russia’s Ukraine invasion.

This is news that we hate to pass along to you, but it’s obviously what happens sometimes in the middle of a conflict. A Fox News journalist has been injured while newsgathering outside of Kyiv. Very few details, but teams on the ground are working as hard as they can to try to gather more information. A reminder, of course, that this is in a war zone, that information changes very quickly, and we are working as hard as possible to get the best information that we possibly can, and get all of the details on what has happened. The safety of our Fox team, of course, is of the utmost importance, and our highest priority. More on this as we get it.

There is no word yet on which journalist was involved or the extent of that person’s injuries. This post will be updated as more information comes in.