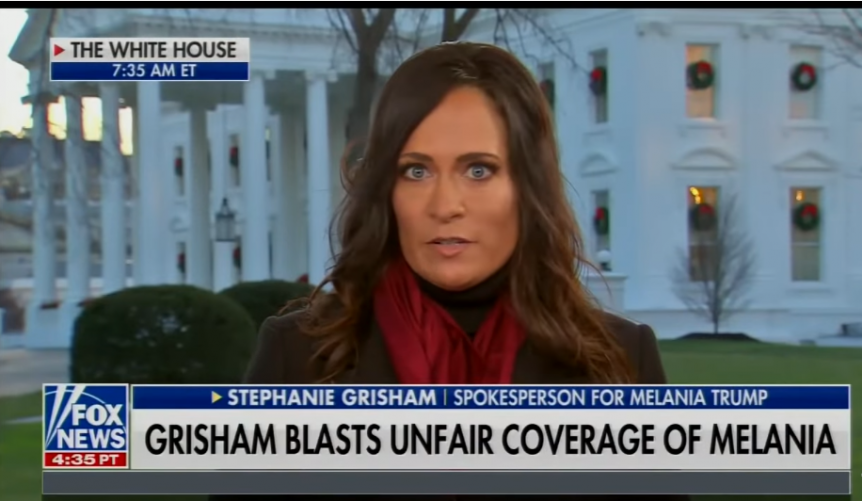 The Trump administration has named First Lady Melania Trump‘s spokesperson Stephanie Grisham as both White House press secretary and communications director, taking over for Sarah Sanders, who is departing the administration at the end of the month.

The first lady announced the news today via Twitter:

I am pleased to announce @StephGrisham45 will be the next @PressSec & Comms Director! She has been with us since 2015 – @potus & I can think of no better person to serve the Administration & our country. Excited to have Stephanie working for both sides of the @WhiteHouse. #BeBest

As stated above, Grisham will now be “working for both sides of the White House,” meaning that she’ll also keep her role as the first lady’s spokesperson, in addition to running the press office for the West Wing.

Grisham has been with team Trump longer than anyone presently in the White House, with the exception of White House director of social media Dan Scavino. Both Grisham and Scavino started on the Trump campaign in 2015.

Grisham is also no stranger to the West Wing. She served as deputy White House press secretary during Sean Spicer‘s tenure.

Before joining the Trump team, Grisham worked in PR, focusing on Republican politics in her home state of Arizona. She briefly worked on Mitt Romney‘s presidential campaign in 2012, and also ran a PR and comms shop in Arizona.

CNN’s Kate Bennett, who primarily covers FLOTUS, writes that Grisham “has made a name for herself as a dogged, if caustic, defender” of the first lady.

Grisham’s job is to thwart as much as possible the criticism levied at the first lady on topics that have ranged from picking cyberbullying as part of her platform to Trump’s need for privacy during a secretive kidney operation last April. Grisham has also helmed PR on the seemingly opposing views of the first lady to those of the President and navigated Melania Trump’s silence in the face of headlines about Trump’s alleged infidelities, which he denies.

It will be interesting to see if Grisham re-institutes White House press briefings. The most recent one took place on March 11.

.@StephGrisham45 will be an incredible asset to the President and the country. I’m sad to leave the WH, but so happy our team will be in such great hands. Stephanie will do a phenomenal job. Proud to have another mom and a great friend in this role! https://t.co/OYvwL0E1JU