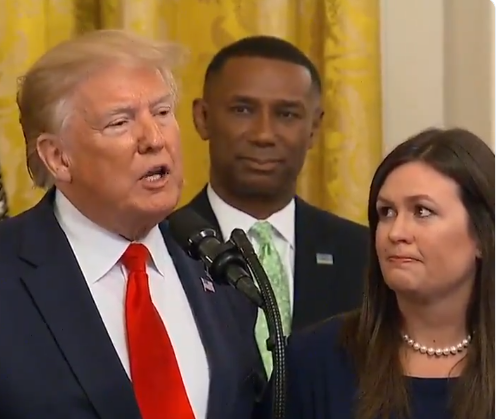 President Trump tweeted this afternoon that Sarah Huckabee Sanders‘ tenure as White House press secretary will come to a close at the end of the month.

After 3 1/2 years, our wonderful Sarah Huckabee Sanders will be leaving the White House at the end of the month and going home to the Great State of Arkansas….

The president has yet to name Sanders’ replacement, though he hopes Sanders follows in her father’s footsteps by running for governor.

….She is a very special person with extraordinary talents, who has done an incredible job! I hope she decides to run for Governor of Arkansas – she would be fantastic. Sarah, thank you for a job well done!

Sanders’ tenure goes back as far as Trump’s 2016 presidential campaign. She would later rise to the role of White House deputy press secretary, and eventually White House press secretary on July 21, 2017, after Sean Spicer abruptly resigned.

The relationship between Sanders and the press wasn’t particularly positive. The White House press briefings were rare over what had been nearly a two-year run as White House press secretary (seems longer, doesn’t it?) and briefings have been non-existent in recent months. In fact, the last one took place on March 11.

It’s not uncommon for administration officials to exit before a president’s term is complete, but there are a couple of events could have expedited Sanders’ exit. For one, Special counsel Robert Mueller revealed in his report that Sanders admitted to investigators that she had made an unfounded claim that “countless” FBI agents had reached out to express support for President Trump’s decision to fire FBI Director James Comey in May 2017.

Most recently, President Trump has been criticized from all sides for remarks he made during his interviews with ABC News chief political anchor George Stephanopoulos, including saying on-the-record that he thinks he would accept help from a foreign country in order to defeat a political opponent.

.@PressSec Sarah Sanders in the White House East Room after announcement of her departure at the end of June. pic.twitter.com/DIZ1idaRt5

The next question is: Will a network sign Sanders as a contributor? Former White House press secretary Sean Spicer appears frequently on Fox News, but isn’t technically a paid contributor. The same is true for Anthony Scaramucci. It remains to be seen what’s next for Sanders.