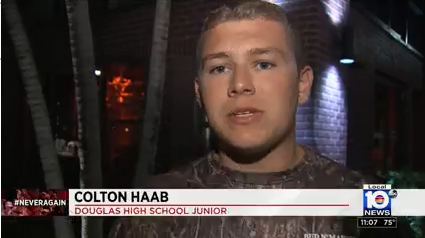 The 17-year-old Marjory Stoneman Douglas High School student dropped out of CNN’s town hall event this past Wednesday, telling ABC’s Miami affiliate that the network shut down a question he wanted to ask about using veterans as armed security guards. He said the network crafted a “scripted” question for him, and he decided he didn’t want to ask it, and declined to participate.

Haab appeared on Tucker Carlson Tonight the following evening and told the same tale, once again claiming that the questions were scripted by CNN. This caused Pres. Trump to tweet, “School shooting survivor says he quit @CNN Town Hall after refusing scripted question.” @TuckerCarlson. Just like so much of CNN, Fake News. That’s why their ratings are so bad! MSNBC may be worse.”

Multiple outlets, including Fox News and HuffPost previously reached out to confirm Haab’s story that CNN scripted him a question.

But a spokesperson for CNN on Friday said the elder Haab sent Fox News and HuffPost an email exchange he had with CNN special projects executive producer Carrie Stevenson that was different from the actual exchange. The email he sent the two aforementioned outlets left out multiple key words, and made it appear as though Stevenson was telling Haab what exactly he needed to ask, when in reality, CNN was allowing the student to ask the question he has already submitted.

Here’s the email released by CNN that represents that interaction. Note the part that indicates “that he submitted”: pic.twitter.com/ajHOBU1V8T

And this is the email CNN was asked by Fox News and HuffPost to comment on, the one sent by the father.

Now have a look at the email that CNN was asked to comment upon Friday afternoon. “that he submitted” isn’t there : pic.twitter.com/pz4dr841ov