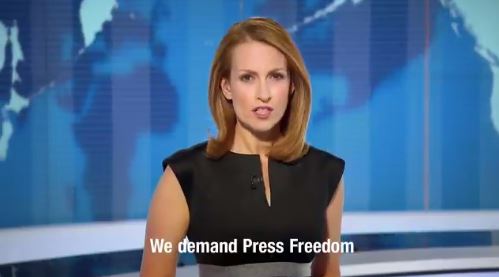 Al Jazeera anchors and reporters from around the world are speaking out about the imminent shutdown of the network.

In a video called Demand Press Freedom, the journalists respond to a list of demands put upon Al Jazeera’s owner, the state of Qatar, by 13 of its regional neighbors. As part of a diplomatic crisis, Saudi Arabia, Egypt, Bahrain, the UAE and other nations made 13 demands including that Al Jazeera be shut down.

In a video posted on Twitter the journalists say, “We demand journalists be able to do their jobs free from intimidation and threat. We demand those with a voice be heard.”

On Saturday, Giles Trendle, the acting managing director of Al Jazeera English, said the network would close despite the demands. “We stand strong and we will continue to do what we do, which is reporting the world frankly and fairly,” he said.

The deadline to meet the demands is today. Here’s the video:

To those who demand that Al Jazeera be shut down. We too have demands. #DemandPressFreedom #JournalismIsNotACrime pic.twitter.com/9eFFhYhewC