NEXT:This Is How Brooke Baldwin Was Able to Get Into a Helicopter and Report From Above Mexico Beach
PREVIOUS:Scoreboard: Thursday, Oct. 11 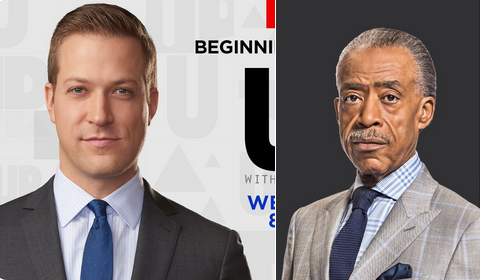 Sharpton’s hour-long Sunday morning show PoliticsNation will be replaced with a two-hour weekend morning panel program hosted by Gura, a former Bloomberg Newser who started at MSNBC on Nov. 25 of last year.

The new program will be named Up with David Gura, and it will air weekends from 8 – 10 a.m. ET, debuting tomorrow.

Sharpton’s PoliticsNation launched in 2011 and aired weeknights at 6 p.m.. In 2015, it moved to its present Sundays, 8 a.m. slot. Effective tomorrow, it will occupy the Saturday & Sunday, 5 p.m. hour, which had been occupied by MSNBC Live.

Re-runs of MSNBC weekday prime programming will continue to keep the 6 p.m. hour on Saturdays and Sundays, which then lead into Kasie Hunt‘s two-hour Sunday evening panel program Kasie DC, which airs from 7 – 9 p.m. ET, and has posted solid ratings since its debut on Oct. 15 2017.