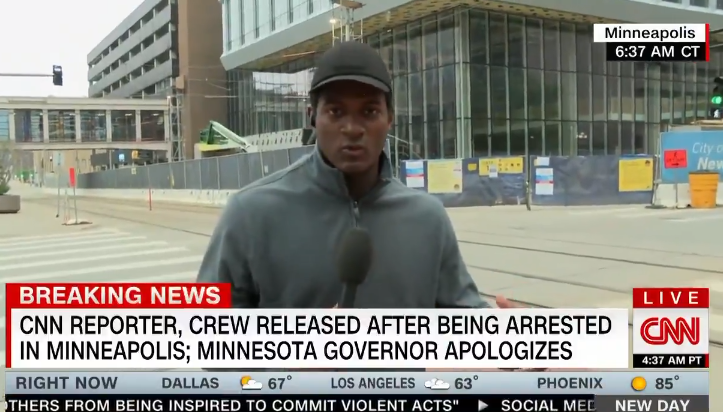 As we reported earlier, CNN correspondent Omar Jimenez was arrested by officers from the Minnesota State Patrol while covering the civil unrest this morning in Minneapolis. Viewers saw this happen in real time.

Minnesota Gov. Tim Walz eventually intervened and made sure Jimenez and his crew were released, but the damage had been done. Roughly an hour and a half after he was arrested, Jimenez, a Chicago-based reporter for the network, checked back in with New Day’s John Berman and Alisyn Camerota, this time from a quieter venue, about what transpired, which was caught on camera, and while he was in custody, which of course was not.

“We saw a lot of it play out on TV there,” said Jimenez. “There seemed to be confusion as to what was allowed to happen. As we were reporting, we had been in verbal contact with some of the police officers, asking, ‘Where can we be?’ We played some of it as they were giving out commands for people to clear the area. We saw that, as protesters completely cleared out. That came after there was about an hour and a half, at least of where we were standing, where there was no police presence. We saw people walking down the block, and whether we were press or not, we wanted to make sure we were out of the way. We stepped on to the corner [of the street].”

Jimenez added: “I think the moment before the arrest happened, we saw at least one protester run past us, and that person was cornered by [Minnesota] State Patrol. After that person was apprehended, they then turned toward us. That was the first moment that people got behind us. We were surrounded by state patrolmen and it seemed like Minneapolis police officers as well.”

So, what happened while Jimenez was in custody?

“Everyone to their credit was cordial after that happened,” said Jimenez, taking the high road. “I was talking to the officer that was leading me away. I was like, ‘Hey man, we’re going to be out here for the next few days. What is the guidelines of where we should be? If you don’t want us that close, where should we be?’ He said, ‘Look, I don’t know. I’m just following orders.”

Jimenez noted that the police were already on edge due to the destruction in parts of the city in recent days.

Jimenez added that as far as the people who were there, “There was no animosity, they were not violent with me. We were having a conversation about how crazy this week has been for every single part of the city.”