NEXT:Source: Cami McCormick Is Staying at CBS News; Dean Reynolds Will Retire This Summer
PREVIOUS:CNN's Omar Jimenez Explains the Story Behind His Arrest 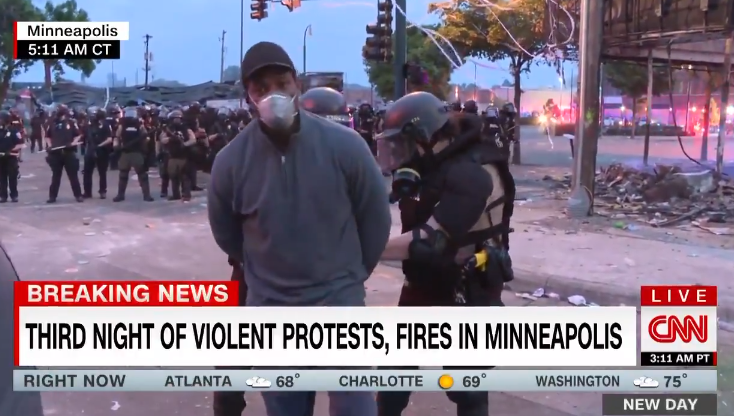 The scene in Minneapolis got ugly last night, as people protesting the death of George Floyd, brought on by a police officer now under arrest for murder, set fire to the Minneapolis Police Department’s third precinct building. Countless arrests were made deep into the night, and into the early morning.

Those arrested included a CNN crew.

Many local and national news outlets were on the scene this morning as things flared up. During a live shot for CNN’s New Day, correspondent Omar Jimenez was arrested while on-air.

Jimenez can be heard telling police that he and his crew were happy to go “wherever you want us we will go. We’re getting out of your way when you were advancing through the intersection. Let us know and we’ve got you.”

He then started his report, before being interrupted by arresting officers. Jimenez said, “I’m sorry? Do you mind telling me why I’m under arrest, sir? Why am I under arrest, sir?” He even flashed his media credentials and someone on-air could be heard saying he was with CNN.

Later in the show, CNN correspondent Josh Campbell, reporting from another part of Minneapolis, noted that he was not arrested. Berman then pointed out that the white reporter was left alone, while the reporter of color was arrested.

Minnesota Governor Tim Walz has apologized to CNN president Jeff Zucker, and reportedly told Zucker that the arrest “was inadvertent and unacceptable.”

Jimenez and the crew have since been released, but not without some controversy. Via a Twitter statement, the Minneapolis State Patrol claims it was not aware the CNN crew was part of the media when they were being arrested, but CNN’s public relations team pushed back, saying the team made clear they were members of media, which is confirmed by the footage that aired live.

This is not accurate – our CNN crew identified themselves, on live television, immediately as journalists. We thank Minnesota @GovTimWalz for his swift action this morning to aid in the release of our crew. https://t.co/3cvtsqbbWz