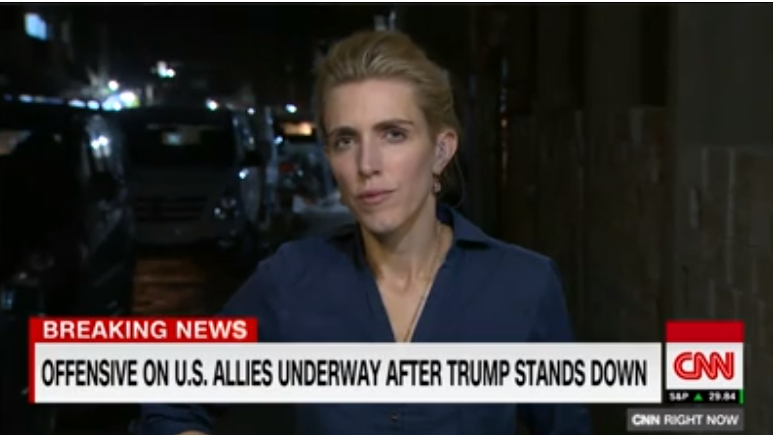 Turkey is now launching its military offensive against the U.S.-backed Kurdish forces in Northern Syria. This action comes in light of President Trump’s controversial decision to withdraw U.S. forces from the region.

Trump’s decision has essentially cleared the way for Turkey to attack Kurdish forces — the SDF — who were a key American ally in the war against ISIS.

As of publication time, CNN is the only US cable news network to have a reporter on the ground in Syria covering the Turkish military offensive.

CNN chief international correspondent Clarissa Ward and her team were right on the outskirts of the border town of Ras al-Ain earlier this afternoon in the aftermath of the first wave of strikes, where they witnessed smoke billowing  from multiple explosions. There is “an overwhelming wave of civilians trying desperately to get out of this town, fearful for their lives,” Ward reported during CNN’s 1 p.m. ET hour (CNN Right Now with Brianna Keilar).

According to Ward, civilians have absolutely no idea where it’s safe but they’re fleeing the town anyway.

“This Turkish military operation is underway, and it’s clearly going to be bloody,” added Ward. 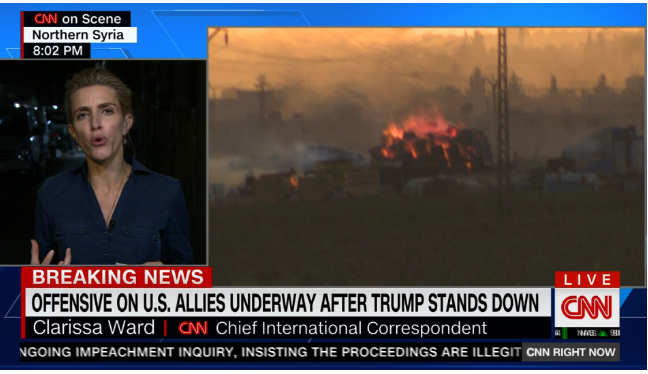 CNN senior international correspondent Nick Paton Walsh, who has reported on more than his fair share of Middle East conflict over the years, is positioned on the Turkey-Syria border. He’s been reporting on CNN throughout the day.

Here’s what Paton Walsh was able to tell Jim Sciutto during the 9 a.m. hour of CNN Newsroom: