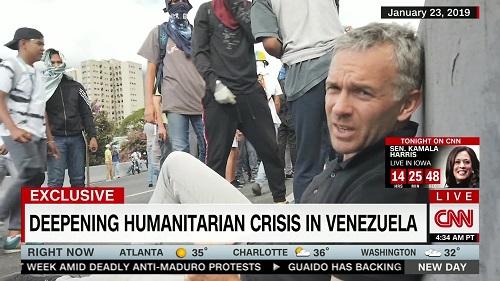 CNN senior international correspondent Nick Paton Walsh has won Emmys for his reporting on (and from) the conflicts in Iraq and Syria. He covered Hurricane Maria from Puerto Rico in 2017, and reported from a bomb shelter in Ukraine in 2015.

Fast forward to 2019, and he has a new undercover assignment: Venezuela.

Paton Walsh has filed a number of reports from South America as of late, focusing on the humanitarian toll of what has been transpiring in Venezuela. He spoke with civilians, young and old, and conducted interviews with Venezuelan army defectors, who say they want American military assistance for their revolt against Nicolás Maduro.

National security advisor John Bolton told the press on Monday that the U.S. would consider military intervention if necessary. U.S. treasury secretary Steve Mnuchin spoke about the sanctions being placed on PDVSA, Venezuela’s state-owned oil company, and he called for Maduro to step down and for the immediate transfer of control of oil assets to the new Venezuelan government.

CNN has been in the thick of the story, as it seemingly always is, so much so that Maduro took a swipe at the network’s reporting in a live statement earlier this week, saying the following:

“They don’t put those images [of pro-government demonstrations] up on CNN, they only put up images over and over again of the opposition, in a great worldwide manipulation that I denounce here. I denounce the great global manipulation of the television outlets in the United States and Europe that show a virtual Venezuela.”

We caught up with the CNN correspondent on Thursday. He is now in Bogotá, Colombia with his crew.

TVNewser: How are you and your crew doing!?
Paton Walsh: We are all well, a little tired, some of us suffering from food poisoning we got in Bogotá, oddly. If you have cash dollars, with a little effort you can live quite comfortably in Caracas – even on a Domino’s diet – compared to the daily exhausting search for food that most Venezuelans experience.

I noticed Maduro cited CNN’s reporting, claiming you’re telling only one side of the story…  “I denounce the great global manipulation of the television outlets in the United States and Europe that show a virtual Venezuela.” Have you reached out to the Maduro government for an interview to get their side? (what exactly that is, I’m not sure) If so, what type of response has there been?
We have a team inside Venezuela permanently who have long been reporting the Venezuelan government’s point of view. Covering a humanitarian disaster of this nature – especially when it’s so blatant, long-lived and man-made – isn’t a partisan effort. It is right in front of you; an undeniable fact. I am not sure the palpable hunger and poverty of the Venezuelan people requires a phone call to the Venezuelan government to comment how it happened. Even so, we have repeatedly and adequately carried their point of view in our reporting.

You’ve spoken with army defectors who want U.S. military assistance in the revolt against Maduro; but have you found that the civilians you’re speaking with want U.S. intervention as well, or do they want us to stay out?
Nobody wants a conflict. The last thing a hungry country – where the average citizen will lose 10 kg (22 lbs) this year, according to estimates – is military confrontation. That will massively complicate the solution and introduce a host of other factors that will just make people hungrier. The people we talked to want food, and life to go back about 10 years to a time when things were not as desperate. It’s not a geopolitical question on the Venezuelan streets; it’s an obvious and immediate question of how will I get food, gas, water today? Venezuela was once rich, the economy was grossly mismanaged and the elite stole the wealth. There’s not much else to it. 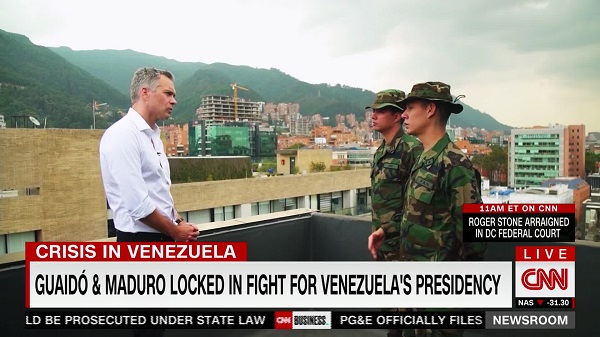 I recall you spending a lot of time shuttling back and forth between Iraq and Syria. You spent time in Ukraine back in 2015; covered Hurricane Maria in Puerto Rico in 2017. Talk about how Venezuela is a different assignment for you, in terms of geography/travel and just more generally what the people there are presently through?
After about six years of Syria, ISIS, Ukraine and Afghanistan, Venezuela is a lot less violent. Most people we met were curious as to who we were, but welcoming. It isn’t as polarized society as you meet in Ukraine or Iraq. It is a pretty closed and repressed place but so far the repression is periodically violent, rather than obsessed with brutality like with the regime in Syria or ISIS in Iraq. There is a crime wave in which about 80 people are murdered nationwide, daily, but so far Venezuela is relatively tranquil, with the protests being polite in their anger, and the riot police – those that we encountered – relatively restrained in how they tackle unrest.

You can catch Paton Walsh’s next report on CNN U.S. at 3:30 p.m. ET during CNN Newsroom with Brooke Baldwin.