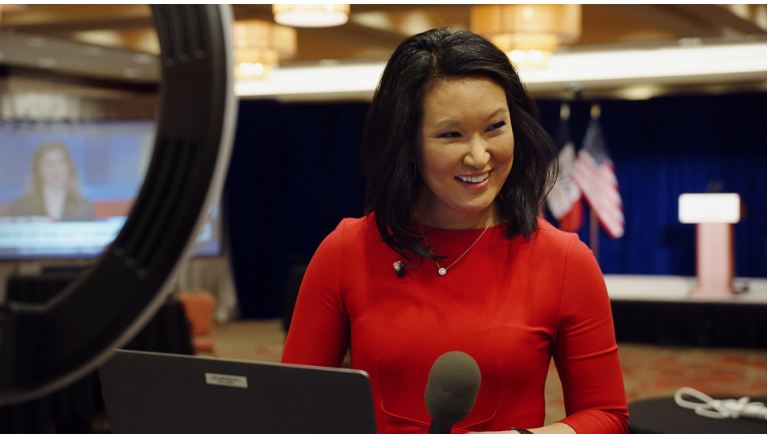 Today is launch day for CNN Films’ new documentary for HBO Max, On the Trail: Inside the 2020 Primaries.

The documentary focuses on several CNN newsers, including Wright, Lah, CNN White House correspondent Kaitlin Collins and CNN Washington correspondent Dana Bash. Wright was the embed for Minnesota Sen. Amy Klobuchar when she ran for the Democratic nomination, and she paired with Lah, who was the correspondent assigned to that campaign.

“How are you taking the pulse of voters without cross-crossing America?” Lah is asked during the virtual panel. She responded, “There has been a lot of strategic covering depending on where you live—and a whole lot of driving.” Lah added that from where she is based, “I can drive to Arizona, I can drive to Nevada.”

Wright is asked if it’s tough for the embeds to cover their candidate objectively, knowing their livelihood is tied to the candidate staying in the race.

“Regardless of who I’m covering, my job is to provide editorial coverage for CNN, and have that coverage be truthful and accurate,” responded Wright, who added that she started as a Sen. Kamala Harris campaign embed, and then became a Sen. Klobuchar embed.

Director Toby Oppenheimer on the thought process behind On the Trail: “What we wanted to do was pull back the curtain” and “really understand … how they’re juggling their careers and their families.”

Lah added, “Everyone talks about balancing work and career. That’s all B.S. You just put one foot in front of the other.”

Oppenheimer touched on the difficulties of covering a reporter (something we’re all too familiar with): “They’re used to putting the camera on someone else and not being the focus of the story,” adding that it took them awhile to open up.

“I curse a lot in it,” Wright admitted. “It’s because I just felt so comfortable around them.”

She said she was tense for the first three days, but it got better. “You want to be open with them,” said Wright.

The significance of both being women of color, Lah, an Asian American, and Wright, a Black American, wasn’t lost on Lah.“We wanted to be authentic. We want to have other women who look like us cover the news,” said Lah.

Wright hopes viewers “look at this film and say, ‘She might not have it all together, but look at what she can do.’”

Lah said it was tough being on the road, and balancing work and personal life: “I never met any of the teachers who taught my kids. All of these logistical things that come so easy to normal people become incredibly difficult,” like having a family dinner. “We have a lot of Facetime dinners on the road. … You have to find a lot of workarounds.”

When asked about citizen journalism, Lah remarked that it’s both “a blessing and it is also a challenge.”

On why it’s a blessing: “Without citizen journalism, Minneapolis, we don’t know about it. We don’t know about a lot of experiences of Black men. … that has changed this country,” she said. “At the same time, there is so much video on Twitter, on Instagram, that what you instantly believe to be the story, may not be the story. … One small clip may not tell the entire story.”