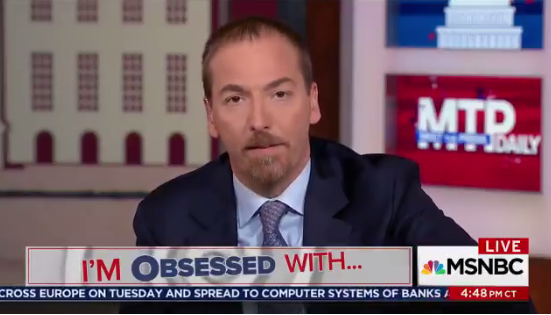 President Trump has been laying into the news media with more vitriol than usual over the past couple of days, and Chuck Todd has had it.

The NBC News political director and Meet the Press moderator gave a passionate monologue in defense of the press during yesterday’s edition of his 5 p.m. MSNBC show MTP Daily.

“This White House’s war on the press is nothing more than a war on the truth,” Todd says in a measured fashion. “Do we get it right all of the time? Nope, we don’t. And when we don’t, we run a correction and in some cases people lose their jobs…”

Todd also goes on to defend CNN in light of the recent resignation of 3 journalists who published an inaccurate report linking Trump ally Anthony Scaramucci to a Russian investment fund. The network apologized, and Scaramucci accepted said apology.

Todd says that MSNBC has made its fair share of mistakes as well, and has “acknowledged them publicly.”

Todd also slams WH deputy press secretary Sarah Huckabee Sanders‘s for her comments during Tuesday’s press conference suggesting people go watch a video showing a CNN health editor not involved in the network’s Russia-related coverage, question the network’s focus on the investigations of the Trump administration’s connections to Russia. But Sanders readily admits “whether it’s accurate or not, I don’t know.”

“This White House’s M.O. is to peddle a false story to claim the media’s telling false stories…so no Mr. President, no White House press shop, the media is not ‘the enemy of the people,’ we’re just here to find, as Carl Bernstein put it so well, the best obtainable version of the truth, and sometimes the truth hurts.”

Trump’s War on the Media: Does the media get it right all the time? No — but journalists get fired for not telling the truth. #MTPDaily pic.twitter.com/pHVwX7ieh9