NEXT:Meet the Press Apologizes After DOJ Spokesperson Accuses Broadcast of 'Deceptive Editing/Commentary by Chuck Todd'
PREVIOUS:Friday, May 8 Scoreboard: Tucker Carlson Ranked No. 1 on Cable News in Total Viewers and Adults 25-54 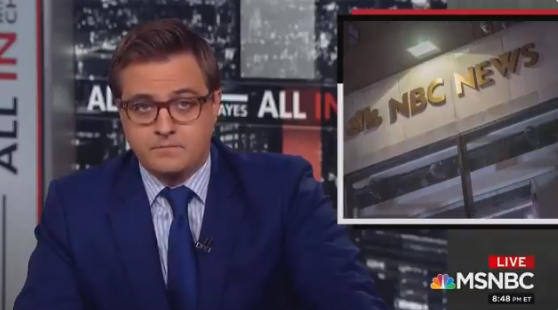 Chris Hayes sat down with The New Yorker’s Isaac Chotiner recently for a lengthy and fascinating Q&A that hit on a variety of topics. Among them was the 8 p.m. host’s coverage of a sexual assault allegation against Joe Biden by a former Senate aide of his named Alexandra Tara Reade. Hayes covered the story on his April 29 broadcast, which ticked off some of his left-leaning viewers and got #FireChrisHayes trending on Twitter.

The Q&A was published yesterday (May 10).

Last week, you covered Tara Reade’s accusation of sexual assault against Joe Biden, and after that there was a Twitter campaign to #FireChrisHayes. What did you make of that reaction, and how widespread do you think that feeling is among the Democratic electorate and/or MSNBC viewers?

I thought the reaction was probably partly representative of a real feeling among a lot of the viewers, and partly a little bit of a Twitter frenzy that isn’t necessarily representative. I understand that we’re in the midst of a truly unfathomable national calamity in which we’re losing thousands of our fellow Americans every day, I think far in excess of what we should be, and we’re going to be at Great Depression levels of unemployment. The stakes feel extremely profound, and the idea of anything that takes us away from that feels like a betrayal. I sort of get that. I also get—and I’m going out of my way here to be fair in my prologue, so, if you just indulge me—

I also think that one of the lessons of 2016, one of the problems, is you only have one campaign to cover. You only really have two candidates, ergo everything is kind of zero sum, and the Hillary Clinton emails are a perfect example. It was perfectly fine to cover that story. It was a story. But it was covered at orders of magnitude and excess of what it could have been, and people see this replaying itself now, and are terrified about that.

That may be, but do you also just think that it’s just rank partisanship, and people don’t want to hear it, even if it’s an accusation of sexual assault?

Yes. That’s part of it, too. There is a whole variety of “This person is a Russian plant. There exists, whether through these pieces of evidence I can point to, or just sheer implication, some vast conspiracy.” Or not even a conspiracy, just, basically, “This is the product of an obviously disingenuous political hit job.” I don’t think people actually believe that, but I just think that the desire to believe that is powerful, and it’s probably worth trying to check that. Then, people online are, like, “How dare you lecture me condescendingly about what I should believe and what I should not believe?” It’s, like, you can believe whatever you want. It’s like talking about certain habits of mind that are probably good for us to all try to work on.