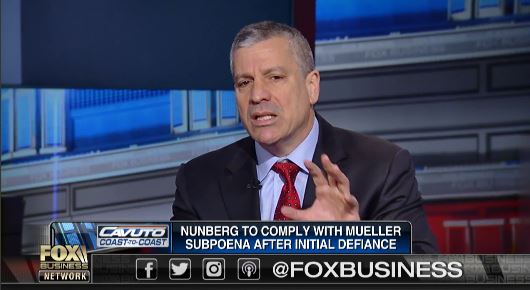 In the midst of Sam Nunberg‘s multiple interviews Monday about how he was going to refuse to comply with a grand jury subpoena from the Special Prosecutor, Charlie Gasparino went on Fox Business saying Nunberg told him he was drinking. “The man needs help,” he said.

Well, today Gasparino reported that not only is Nunberg now going to comply, he’s going to get help for substance abuse problems. (During her 37-minute interview with Nunberg last night, CNN’s Erin Burnett told him she smelled alcohol.)

This afternoon on FBN, Gasparino also gave the background on his 45-minute off-air conversation with Nunberg yesterday, before he made all those media appearances.

“We had a debate about whether we should trust information from a man who was inebriated. In the middle of that, [Nunberg] went to the Washington Post and a series of interviews. And that’s when it went off the rails,” Gasparino said, with MSNBC’s Katy Tur being the first stop.

“I may cut Katy Tur a break because she was the first one. But after that, you’re putting a guy on that has issues,” Gasparino lamented. WATCH: